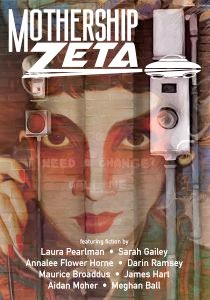 This flash fantasy uses emails from Claire to tell its story. She is conversing with a mouse that wants to be transformed into a cat so it can scare off other mice in its habitat. She identifies several options using magic or science that could work. Each has a downside to it. In the end, the option she recommends has some entirely unexpected results for the mouse.

I found this trundled along at a pleasant pace. The author infused it with mystery and humor and it was an enjoyable story.

“Rescue” is a short fantasy about a demon, Malachai, and his dog, Baxter. At the local dog park, a mage ambushes Malachai and kidnaps Baxter to force the demon to grant him a wish. At first furious, Malachai confronts the mage, refusing to grant his wish for immortality. But when he discovers the wish is actually for the mage’s beloved dachshund he softens and tries to explain why it would be unkind to the old and feeble dog.

As they negotiate the wish, the dachshund dies in the tender embrace of Baxter. Unable to restore life to the dead, the demon offers an alternative to the mage, one that would allow him to be with his dog forever.

The story grabbed my attention at first, but the middle slowed down until the final twist. In the end, it made for an average story with an interesting perspective.

A young teenager, Izzie, is the daughter of superhero parents in this short fantasy. Her father’s nemesis, Doctor Alabaster, is assembling the parts to make a death-ray that can kill her father. Izzie, a wannabe superhero, stumbles on the plot when she stops some thieves working for Alabaster.

While Doctor Alabaster is drawing both parents into a trap, Izzie tries to rescue a kidnapped police detective and in the process she unwittingly provides the last item needed to make the death ray. Now desperate, Izzie has to find where her mother and father are fighting the arch villain. When she does, she gets her chance to prove that she too can be a superhero.

There was plenty of action in this fast-paced yarn. Maybe too much as it got in the way and created a confused melée of fights and chases. But the story was a pleasing read.

Ramsey’s flash SF story delves into the consequences of time travel as a tourist trap. Not only can the organizers take the customer back in time, they can also look ahead to see how good, or bad, each customer will be during the excursion. The story gives an invoice for a future customer with all the fines and penalties they will incur on the trip for less than stoic behavior.

The author managed to pull off a short and amusing story for some light entertainment. The unusual structure worked in so short a story.

“At the Village Vanguard (Ruminations on Blacktopia)” by Maurice Broaddus

Astra Black, a science police officer, is fiercely independent in her ways and determined to see her colony survive. This short science fiction tale chronicles a racially motivated threat to her community living on the moon. Told through a series of interview snippets, the story reveals how the African–Americans have justifiable pride in what they have achieved leaving endless prejudices behind and building a new life. Now their colony faces threats from those who fear their success.

Astra has her own ideas on how to end the threat. After making a desperate transition to the enemy’s location, she sets about stopping them, accepting that it most likely will cost her life.

This story was a challenge to follow at times. But the main story was about how prejudice follows us all. How those who care have to fight against it all the time. It was worth the challenges to read the story for the insights it provided.

This is a short science fiction yarn. Arturo develops a new AI program and installs it in his latest android, named after his lost sister, Magda. He believes this AI program will reach the long sought after achievement of self-consciousness.

Magda, the android, is helping Arturo prepare for the big public announcement. She coaches him in how to make the announcement, simulating each attempt so he can see how the proclamation is accepted. In the simulated audience of reporters is one person that Arturo had a crush on years ago. As Magda guides him, Arturo watches to see how things will turn out with the reporter. Will they get back together again?

Hart’s story lacked pace and much pull to find out what will happen. The mystery element wasn’t strong enough to engage the reader. The frequent restarts of the announcement become repetitive before the end of the story.

“The Penelope Qingdom” by Aidan Moher

Moher’s short fantasy tells us about Ivan and Penelope. These two eleven year-old friends bond through a fantasy land Penelope creates in her basement. Penelope’s father moves every few years as the Royal Canadian Mounted Police re-assign him across Canada. He has just moved next door to Ivan, the son of two mothers.

Penelope and Ivan bond quickly as she shows him her magic Qingdom and she gives Ivan his own character in the adventure. As they grow up, their affection grows too, and the magical adventure adjusts to keep them in the story.

After a few years, the RCMP reassign Penelope’s father and they must move away. Distraught, the two teenagers vow to maintain the Qingdom, and Ivan will create a separate colony. Ivan promises to stay in contact and uphold the noble principles Penelope has established for the Qingdom.

The author has intertwined several sub-plots that keep this story interesting. The placement of the Qingdom interludes is unusual, and at first confusing, but soon these are assimilated into the rest of the plot. “The Penelope Qingdom” is a nice, longer story.

“The Last Half Hour of Winter” by Meghan Ball

Three elderly men are whiling away the last days of winter in this flash fiction. A young couple pull up in a BMW and the old men watch as the woman hands a ring to the man who then leaves. The young woman joins the men to play checkers. She explains that she and her husband break up at the start of each spring, and get back together for the holidays. She settles down to play checkers as she waits for her mother to come and get her.

A quick story that seemed to finish before the story should have ended. The writing was pleasant enough, but the ending left a hole that was hard to fill.