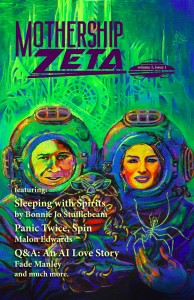 “The Customer is Always Right” by Anna Salonen

Mothership Zeta is a new magazine connected with the Escape Pod podcast. Like most new magazines, it has a statement of principles, one that’s far different from the usual: the magazine is dedicated to “fun” stories—vaguely defined on purpose—and shows eight new short stories.

The magazine starts out with “The Customer is Always Right” by Anna Salonen. It’s told from the point of view of a customer support rep whose customer is reporting issues with his Annihilator5000, a military robot, and it quickly turns out that some big mistake has been made. The story is told with dialog, but you get the basic idea of where it’s going about halfway through and there isn’t much actual conflict. Cute, but not much more.

Fade Manley takes on an interesting structure in “Q&A: A Love Story.” It’s a series of answers to unshown questions from some sort of investigating authority. It tells the story of Lisette, an AI who develops consciousness—and falls in love—which leads her to break the law. The structure is nicely done, but the story is pretty well-worn.

“Panic Twice, Spin” is something of an anti-Pinocchio story that starts out as a long video game fight scene. Fight scenes don’t usually impress me, and since this is a video game, there’s really nothing at stake until halfway through the story, where we learn that the character described, Mahina, is a childlike robot created to replace a dead daughter. Malon Edwards spends too much time padding out the beginning and no real time dealing with the issues involved.

The concept of Bonnie Jo Stufflebeam‘s “Sleeping with Spirits” is a clever one: after making love to his girlfriend Wendi, Nolan sees a spirit showing up: the first man she had sex with. This, of course, creates issues with the relationship, especially since her other lovers—and his—keep appearing. I like the situation, and the way that the two main characters manage to work things out. It’s a metaphor for any relationship, and handled very well.

“Bargain” pretty much announces its intention from its title: a deal with the devil story. Malachi is a demon who is summoned by an atypical summons, Lydia and her dog, Baxter. But it turns out her request is something out of the ordinary. Sarah Gayley‘s story switches from silliness to poignancy and comes to a very satisfying ending.

“Places” by Suyi Davies Okungbowa is set in a small town where the women are shackled. It’s not keeping them in chains in the usual sense—women have psychic powers and the chains are used to control them. The story takes on some sexism but ultimately didn’t really grab me.

The story that most clearly matches the goal of the magazine is “Tales of a Fourth Grade Shoggoth” by Kevin Whitmore. Subtitled “by beloved children’s author H.P. Lovecraft,” it’s about Randy Whatley, son of a wizard and brother of a shambling monster named Fhtagn. Randy thinks he’s gotten the short end of the stick which leads to some humorous family drama, both at home and in school. The story is definitely fun, and an amusing take on the conceit of Lovecraft as a teen author.

Paul DesCombaz closes out the issue with “The Insect Forest.” The narrator, Cantor, is talking to someone about to go into the Insect Forest, whose insectoid plants are more than willing to kill the unwary traveler. The story doesn’t get a lot of momentum, mostly being just a listing of the dangers, with a hint of why Cantor is doing what he is.

I like the basic concept of the magazine, but I think the execution has to be better in the future.