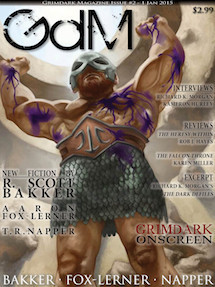 “The Line” by T. R. Napper
“Drone Strikes for Fun and Profit” by Aaron Fox-Lerner
“The Knife of Many Hands Part 1 (The Second Apocalypse)” by R. Scott Bakker (partial story, not reviewed)
Chapter 2 excerpt from The Dark Defiles by Richard K Morgan (novel excerpt, not reviewed)

Grimdark Magazine (GdM), a new quarterly entry in the speculative fiction arena, “presents the darker, grittier side of fantasy and science fiction.” Based in Australia, and paying SFWA pro rates to its writers, the boundary-pushing ezine includes articles, interviews, novel excerpts, and short stories. Welcome, GdM.

George Duulngari, the protagonist of T. R. Napper’s “The Line,” is a cage fighter in a futuristic time when cochlear implants that keep their wearers up to date on all kinds of information, and slot machines that are so addictive one can easily gamble a month’s pay in a matter of hours are the norm. In the cage, George is known for his signature move—breaking his opponent’s arm. The Corporation in charge of the whole shooting match directs George to throw a fight. Ultimately, despite the well-designed, gritty, high-tech dystopia, George is a rebel who is good at little more than fighting; the Corporation is a malevolent Big Brother; and, when the two face off in a battle of wills, not much is left to surprise the reader.

Aaron Fox-Lerner’s narrator in “Drone Strikes for Fun and Profit” is a sixteen year-old drone pilot who becomes interested in messages left for him on the tops of buildings in an area he is working (read monitoring and, every now and then, killing bad guys). As his interest becomes an obsession with wanting to know more about the messages’ author, it begins to impact his work. He must decide how to address his fixation. His matter-of-fact solution is both apropos and disturbing.