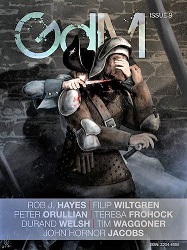 “The Law of the Harvest” by Tim Waggoner

“The Bed of the Crimson King” by Filip Wiltgren
“Pre-emptive Revenge” by Rob J. Hayes

The 9th issue of Grimdark has three original short stories.

“The Law of the Harvest” by Tim Waggoner

This horror fantasy short story is set in a world where the new power has expelled the old gods from the Dominion. Torvan is a harrower, sworn to find and kill any of these fallen gods that still live. He enters a poor village, where one of the Fallen is living off the people who scratch out a life there.

Torvan finds the god at the village altar awaiting a human sacrifice. But when he goes to kill it, he discovers it’s a ruse, designed to make him think he has killed the god. Torvan and his assistant later discover the god in the village and after a brief appeal for its life; Torvan kills it with his special ‘dark blade’.

The story was slow and hackneyed. The ‘hero’ faced little danger and the plot lacked suspense. The writing style seemed more robotic than free flowing, killing any chance for the story to possess any charm.

“The Bed of the Crimson King” by Filip Wiltgren

The Crimson King rose from a simple farm boy to become the hero who defeated the witches in this short fantasy. Now, in his elder years, he yearns for the simpler life of his youth. But a surviving witch is planning her revenge.

The Crimson King’s old adversary has raised a daughter that can deceive the witch hunters and penetrate the King’s inner chambers. Here the King must face off against the young witch and confront his own conscience over the life others have forced him to lead.

The story was patched together, like a New England quilt, from small glimpses of each character. Slowly the author built the plot and developed the characters of the protagonist and antagonist. The writing style was fast and easy to absorb. Overall, a nice story.

“Pre-emptive Revenge” is a short fantasy set in a medieval land. Betrim’s wife will rule this land; but first, all the members of the ruling Jogaren clan must die. Betrim has laid siege to a city and trapped a Jogaren family inside.

First, Betrim tricks the best Jogaren fighter into exposing himself and then kills him. Next, he sends his best assassin into the city to wipe out the entire Jogaren family, including a young wife and newborn baby. Betrim hopes the death of all the Jogarens will end the need to defend the city and he can take it without any other loss of life. Betrim’s plans do not produce the expected results.

The pace of the rather bloodthirsty story was nice. But the plot itself lacked punch. It had little danger or intrigue to pull a reader through to the anti-climactic end.