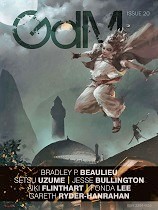 “We Have No Word for Compassion” by Setsu Uzume

“Holy Diver” by Jesse Bullington (reprint, not reviewed)
“The Flight of the Whisper King” by Bradley P. Beaulieu

The latest issue of this magazine of moody, violent fantasy offers one new short story and an original novella.

The narrator of “We Have No Word for Compassion” by Setsu Uzume is one of a small group of warriors in pursuit of the enemy that destroyed their homes and families. Unlike the others, the narrator spent time with the enemy, and knows their language. Much of the story deals with words for complex emotional states, which the enemy cannot understand. (For example, the word “erfayja” means “deep sadness caused by the plummet from roaring heights of pain and rage.”) As the title indicates, the narrator’s own tongue also lacks certain concepts. An attempt to end the war leads to a tragic conclusion.

The theme of conflict arising from an inability to communicate is an interesting one. It is ironic that the author’s style is often murky and unclear, lessening the impact of an otherwise powerful story of a mission doomed to failure.

Taking up more than half the issue, “The Flight of the Whisper King” by Bradley P. Beaulieu is set in a fantasy world reminiscent of the tales of Scheherazade. The protagonist is a young girl, newly apprenticed as a thief. She and her companions enter a military outpost, recently devastated by an attack of enemy golems, in search of loot. The girl discovers a dying woman, one of an elite group of warriors, and helps her make her way to safety in secret. Through a set of complicated circumstances, the two wind up working together to prevent a treacherous son, conspiring with unsuspected allies, from killing his father, a mad king, and taking his place.

This brief synopsis offers only a hint of the story’s complex plot, which combines convoluted palace intrigue with swashbuckling battles. Despite the many twists and turns, and the large number of important characters, the author’s clear and readable style ensures that the reader is never confused. Although the story contains enough violence to please fans of the darker side of fantasy, it will also appeal to anyone who enjoys tales of adventure in magical lands.

Victoria Silverwolf had to attend a four-hour education session one morning, after working ten hours the night before.