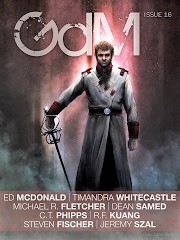 “A Hero’s Guide to Fairy Tales” by Steven Fischer

A recently coronated king remembers the hero’s journey that earned him the throne in Steven Fischer‘s “A Hero’s Guide to Fairy Tales.” Contrary to the kingdom’s popular, polished account, the king’s memories highlight a harrowing journey, each victory weighed down by equal parts tragedy, even cowardice. Though the themes ring familiar (e.g. the touch-up of national narratives by history’s victors, or the exploration of victory’s ultimate cost), Collins writes the king’s musings with just enough detail to explore these themes, while hinting at an intriguing, broader world.

The remnants of humanity gather in the Lunascraper Tower, an enormous vertical arcology, to escape the poisonous mists below, in “The Bronze Gods” by Jeremy Szal. Dwelling in the tower’s lower levels, Sebastian pines for the richer, cleaner living quarters of the upper levels; that the mists are rising only adds to upper levels’ draw. The situation is remedied when Zachary, a close friend, asks Sebastian to move in. Zachery’s upper level quarters are a perk of volunteering for military excursions beyond the mists, and it’s for one of these that he’s now departing. Sebastian happily agrees to the living arrangement, and the move-in date is set for Zachary’s return. But when the day arrives, Zachary’s battalion doesn’t. Upon discovering his friend’s quarters ransacked by military Inquisitors, Sebastian flees. Then, when the resulting chase renders an Inquisitor dead, Sebastian knows he can’t return to his old life. Donning an Inquisitor’s mask, he vows to uncover the truth of Zachery’s death. From here, the story’s pace zips along, and events culminate in a satisfying reveal. Szal writes a warm, sympathetic relationship in Sebastian and Zachary, and though their friendship remains mostly nondescript, Sebastian’s heroic devotion makes for an active protagonist who’s easy to root for.

A mother and daughter navigate a fire-ravaged post-apocalypse, in Timandra Whitecastle‘s “On the Dragonroad.” Scavenging for food and desperate to evade the Sickness that triggers welts on survivors’ skins, the duo trek the dragonroad to the mountaintop that houses the dragon’s hoard. But the journey is interrupted by Knights of the Silver Cross, zealots tasked with “purg[ing] the world of evil,” while supplying the dragon with a steady offering of sacrifices. The encounter dovetails into a sudden resolution, while world-building questions remain unanswered, especially regarding the dragon’s true nature. Nonetheless, Whitecastle succeeds in characterizing a resonant mother/daughter relationship in this issue’s most emotionally compelling story.

Ryhalt, a brigadier-turned-general, challenges an accuser to a judicial duel in “To See a Monster” by Ed McDonald. The accuser is Torolo, a “service-dodging” aristocrat and old university colleague, who deems Ryhalt responsible for the loss of the battalion’s most valiant soldiers. Ryhalt’s call to retreat, Torolo argues, was an order motivated by cowardice, not strategy. In a dramatic turn, as the duel commences, Ryhalt realizes he’s outmatched. The action unfolds with swiftly reading prose, and escalates to an appropriately visceral climax—an arc that neatly parallels Ryhalt’s own struggle against guilt-stricken, inner demons.