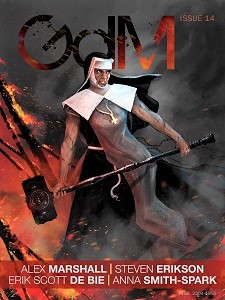 “Beasts of the Burnished Chain” by Alex Marshall

The only story in the latest issue of this Australian magazine is “Beasts of the Burnished Chain” by Alex Marshall. A gruesome tale of civil war, it is set in a fantasy world where the Church is battling the State. Among the soldiers of the Church are those born with deformities, which are thought to be signs of evil. Surgically altered to make them appear more human, they are enlisted into military religious orders. The protagonist is one such warrior. She is forced to join forces with her despised foe when they are both attacked by monsters. It all leads up to a cynical and ironic ending. This story has plenty of violent action to hold the reader’s attention. Some aspects of the imaginary world are unclear. A few words, such as “boonies” and “shell-shocked,” seem out of place in an otherwise archaic setting.

Victoria Silverwolf is neither grim nor dark.