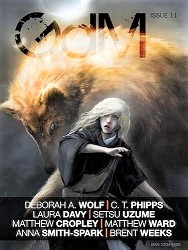 “Devouring the Dead” by Laura Davey

“The First Kill” by C.T. Phipps
“Cry Wolf” by Deborah A. Wolf

In “Devouring the Dead” by Laura Davey, our nameless main character is taken captive by invading marauders and is spared by their necromancer when he mistakes her for his dead daughter. Horrified to find herself his unwilling assistant, she studies his dark arts while planning her escape. But when the opportunity to escape arises, she instead exacts a brutal revenge. “Devouring the Dead” is a grotesque story of necromancy and cannibalism, full of blood and gore. It is an exciting and graphic introduction to the issue, and it sets the tone of what Grimdark Magazine is about.

“The First Kill” by C. T. Phipps is a short story about a cybernetic assassin sent on a new recruit’s first mission as her handler. But it is no ordinary mission, it is a test of loyalty and efficiency. When she tries to flee, taking captive a woman she believes holds the key to her past, she is confronted by her handler, her conscience, and her desire to live. “The First Kill” is an action packed story filled with violence and callous, determined characters who will do whatever they must to achieve their goals.

“Cry Wolf” is a dark fantasy fairytale, as told to children by an elder. It follows the format of The Boy Who Cried Wolf, subverting the characters and my expectation of where the story was headed. Written as a short story in The Dragon’s Legacy continuity, the world is well realized and this comes through in the writing. Despite taking her time to begin the story proper, Deborah A. Wolf does a great job retelling this classic tale.