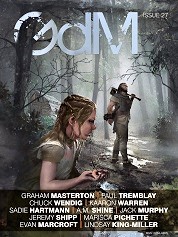 “Island of Sin” by Jack Murphy

“The Tesseract” by Even Marcroft

“The Jewels of the Mermaids” by Marisca Pichette

Amid the articles and interviews in this 27th issue of Grimdark are six stories of the dark and fantastical. When I hear “grimdark,” I tend to think of horror-laden tales coming from the fantasy camp, but there is some great SF mixed in with this lot, too.

An alien lifeform living in a stolen human body and his friend, Teddy, have taken up residence in a remote cabin high in the mountains. One evening, they return home after a walk through the forest to find a gun-toting stranger has let himself into their sanctuary. The alien doesn’t know how the man found them, but he and Teddy are about to find out.

Shine’s story is tragic in so many ways. I couldn’t help but feel for the alien, who didn’t exactly have a choice in where the asteroid landed, and upon which he and his kind rode to Earth. He honestly seems to be a pleasant enough creature (even if he is going about in a stolen body), and I’d like to know more about him as a character. The saddest part about the entire story is that all of the tragedy in the story, both past and present, is avoidable if it weren’t for humanity’s tendency to fear and destroy that which it doesn’t understand. Even Teddy is a tragic figure, as we learn at the end. An absolutely excellent story that tugs at the heartstrings on behalf of every character involved!

“Island of Sin” by Jack Murphy

Caill stands upon a sea stack as he watches a group of approaching ships. He knows that they likely seek refuge from the disease that devastated the main continent but hopes that the sea, whipped to an angry frenzy by his blood magic, will be enough to make them turn back. Unfortunately, they do not. Instead, they launch a tiny craft, clearly protected by magic, towards him. Caill is ready, though—ready to protect at all costs this island that has given him and his family asylum from the horrors of the mainland for more than a decade.

One of the hallmarks of the grimdark genre is that the characterization of all players in a tale is generally bleak, if not outright fatalistic. Murphy’s story is a great example of this, with the added bonus that it’s difficult to tell where the real threat lies until the very end. Ultimately, though, this one is all about becoming the thing one fears the most—the monster within, if you will, rather than the threat from without. Another great tale!
“The Tesseract” by Even Marcroft

The warden oversees Indefinite Corrections Outpost 1, at which he is responsible for the rehabilitation of those citizens deemed to be either failures or undesirable according to the Kaiser’s ideologies. He’s devoted years to the art of administering the perfect punishment for every prisoner, each torture individually tailored. One of his very favorites is Room 57, also called “The Tesseract,” but recently it has become something of a sore spot for him. Prisoner 3934 has been in the Tesseract for several weeks but shows no signs of the torture’s effects. As far as the warden is concerned, this just won’t do.

I quite enjoyed Marcroft’s story. It’s an interesting bit of psychological horror that ruminates on what it means to be imprisoned. Now, on the surface, it’s easy to argue that anything that limits one’s movements or confines one physically is imprisonment, and this would be technically accurate. But which is worse—to be physically bound yet psychologically free or physically free but psychologically imprisoned? That’s the theme that Marcroft explores in this fascinating tale, thus prompting a little introspection on how we, too, might be unknowingly allowing ourselves to be incarcerated. For what it’s worth, I would agree with the author’s conclusion on this one.

“The Jewels of the Mermaids” by Marisca Pichette

Formerly a mailman on the mainland, Jan now serves the inhabitants of an island called Stone. Of course, it’s not an official assignment—everyone on Stone, himself included, are here to pay for one crime or another. This morning, as he heads down to the docks to collect the day’s mail, he hopes that the overcast sky holds till the next morning. Tonight is a full moon and, if the sky clears, the mermaids will hunt.

Pichette presents a very nice twist on mermaid lore. It’s a strange melding of werewolves and mermaids, which results in a satisfying (and entirely terrifying) tale. The narrative is quite engaging, as well. I found myself so engrossed in it that I was a bit startled (and a touch disappointed) when it ended. This story is well worth a read!

Tony and Glen are a loving couple enjoying a condo-warming party when Tony thinks he spots the naked corpse of a relative speeding through the apartment’s reaper tube. The sight of his dead loved one disturbs him enough that he can’t help but feel around for the suicide pill he always keeps in his pocket. He’s already lost an uncle and a cousin to the torturers at the fortress—he doesn’t want to think about losing another.

Shipp’s brief tale of love and betrayal in a dystopian world is as short as it is disturbing. The plot itself, as entertaining as it is, would work in any type of setting and isn’t particularly out of the ordinary. What makes this story particularly effective is the atmosphere in which it’s shrouded. The visual imagery of glass tubes running through private homes and along streets, transporting the corpses of those deemed to be enemies of the state is quite effective in creating a nightmarish effect, let alone the totalitarian regime in control of this world. A very well-done tale, indeed.

Lying on her death bed, Rebecca, a witch, has only one final wish—that her husband, William, continue to make gingerbread for their young daughter, Abigail, to keep her safe. Grudgingly, he keeps his promise, even after taking a new wife, Hannah. Abigail and Hannah never warm to one another, and eventually, William leads the girl into the forest and abandons her there. Instead of finding her way back home, however, her ravening hunger leads her to the secret behind the gingerbread.

Grimdark’s editor ends the issue on a strong note with this story. “Hansel & Gretel” has always been one of my favorite fairytales, and King-Miller has borrowed its essential elements to create something rather unexpected. Despite the fact that a certain trope is getting a tad worn out these days, I loved the…unusual twist and the explanation behind it. Like the previous five stories, this one, too, is well worth reading.