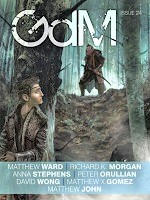 “A Slow Kill” by Peter Orullian (reprint, not reviewed)

“How Not to Invade a Country” by Anna Stephens (reprint, not reviewed)

“The Hunt” by Matthew Ward

Two original stories, one science fiction and one fantasy, appear in the latest issue of this magazine of gritty, violent tales.

“Berzerker” by Matthew X. Gomez takes place aboard a space station orbiting one of the planets of a distant star. The protagonist and her two younger siblings are indentured workers, facing years of hard labor on the station. In order to allow the others to escape, the protagonist agrees to take part in a fight to the death for the entertainment of gamblers. Illegal drugs give her superhuman powers, but not even they can protect her from the schemes of her employer.

The author movingly portrays the dismal life of the workers, and provides a vivid fight scene, certain to satisfy fans of bloody action. The protagonist is appealing in her selfless effort to protect her siblings. Less effective is the futuristic background, which is overly familiar.

The narrator of “The Hunt” by Matthew Ward is the nephew of a tyrannical king. He joins his uncle in a hunt for a white tiger, thought by some to be a divine being. The king wounds the animal, but the narrator lets it escape. After the king kills a would-be assassin, the narrator’s secret plan comes to light, and supernatural beings intervene.

The king is a powerful portrait of brutality, and the reader is certain to cheer on his enemies. The way in which he meets his final fate is foreshadowed in an appropriate way, but may strike some readers as a deus ex machina.

Victoria Silverwolf notes that the title of one of these stories contains a variant spelling.