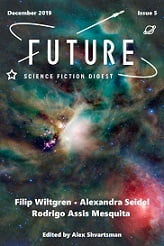 “A Prayer to the Fundamental DOS” by Filip Wiltgren

In the Foreword to this shorter-than-previous issue of Future Science Fiction Digest, editor Alex Shvartsman explains that their first year was sponsored in part by the Future Affairs Administration (a Chinese company), but this is no longer the case. As a result, they’ve had to scale back, hence there are only three stories in this issue. Fear not, though, because they’re all really great.

“A Prayer to the Fundamental DOS,” by Filip Wiltgren, begins with the viewpoint character, whom we later learn is named James—or at least calls themselves James at one point—giving thanks to the “Blue Lady” in some kind of temple. An urchin arrives, starving, and James tries to help him. The story has multiple references that will amuse readers of a certain age. The “blue lady” and the “Fundamental DOS” seem to be clear nods to Microsoft’s old MS-DOS operating system, for example, and the dreaded “blue screen of death” makes an appearance. There are also what appear to be avatars from long-forgotten video games, such as the sword-wielding Link (Nintendo), a General Weygand (PC, I think) and Roland (Amstrad). The overall suggestion is that of an ancient operating system somehow turned sentient after it’s been abandoned—why, we don’t know. The humans in the story seem to be living in a very basic, pre-technology society. The narrative itself is quite simple, but there are a lot of uncovered layers here that made me think about the very human tendency—mimicked by the operating system—to explain the world through stories and religion. Interesting and different and well worth a read.

In “Six Weeks in the Life of a Cultural Documentations Officer,” by Alexandra Seidel, we’re introduced to five-limbed non-humanoids who’ve been carded to a makeshift camp after “the final battle.” The protagonist is Vareia, whose job is to choose individuals in the hope they will be able to preserve their culture’s artistry and historical knowledge. As such, she begins by interviewing different non-humanoids to try and make her selections. The non-humanoids that are not chosen are shot. The chilling themes of eugenics and concentration camps are obvious, and early on Vareia says: “We are soldiers, and we follow orders.” However, a story that could have been quite heavy-handed is not, because the character development is excellent. Vareia is thoroughly three-dimensional, clearly scarred by her experiences and acting in awful, terrible ways as a result, yet remains strangely likable. Seidel’s clever writing gently allows us to wonder if we might do the same, in her shoes, and whether we should all be asking more questions.

“Soul Searching Search Engines,” by Rodrigo Assis Mesquita, is another story that will make you question your perspective. It starts by telling us that the most famous search engine in the world is called LOCATOR, and that even it has occasional difficulties. So, LOCATOR disguises itself as a human web user and joins in a fandom. Well, why not? It chooses Buffy the Vampire Slayer and decides to mimic Buffy herself by living “a regular life with friends,” even if it doesn’t quite understand what that means. It goes on to strike up a relationship with another user called Jess83. The relationship between the two then mirrors the sort of epic, self-sacrificial battle that often featured in Buffy episodes and, actually, it’s rather lovely.