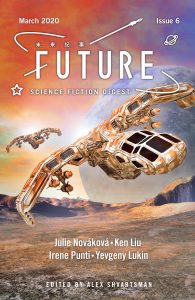 “Our Lady of the Golems” by Irene Punti

Three new stories from European writers appear in the latest issue of this magazine of international science fiction.

“Goal Invariance Under Radical Self-Modification” by Czech author Julie Nováková follows the narrator through multiple technological alterations in her body and mind. She begins depressed and unemployed, due to artificial intelligences eliminating her job. Experimental brain treatment improves her mood; so much so, that she is able to obtain a doctorate degree and work on AI herself.

She finds love and happiness, but loses her family in a tragic accident. After recovering from her grief, she creates a computer simulation of herself. In conversations with it, she comes to conclusions about both human and machine evolution.

As this synopsis indicates, this relatively short work covers a great deal of ground in a brief space. Unavoidably, it is very episodic. The issues raised by the narrator are interesting and important, but at times the story seems more like a philosophical essay than fiction.

In “Our Lady of the Golems” by Catalan author Irene Punti, scientists create androids trained to serve as perfect, willing sex partners, happy to accommodate the wishes of those they serve. The idea is that they will allow clients to fulfill their desires, eliminating the need for human prostitution. Against the wishes of the director of the project, two of the scientists secretly bring a pair of the androids together, so they can learn to enjoy making love to their own kind.

The plot is simple and reaches a predictable resolution. One has to wonder why the scientists thought they were solving the problems associated with prostitution by creating a new kind of prostitute, since the androids are as much thinking, feeling beings as humans. Despite these concerns, the author writes very well, with an ability to convey the emotions of an artificial human being convincingly.

“Vik from Planet Earth” by Russian author Yevgeny Lukin, translated by Mike Olivson, is a very brief tale about a resort planet where visitors of many different species bring pets to protect them from the dangerous native wildlife. The alien narrator describes a human tourist and his pet. The true nature of the pet ends the story with a joke. There isn’t much to this story except its punchline.

Victoria Silverwolf notes that this issue’s reprint is longer than the three new stories combined.