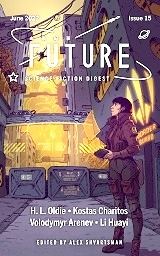 “The Exclusion Zone” by Volodymyr Arenev

This special issue contains two newly translated stories by Ukrainian authors forced to flee their homes due to Russia’s invasion of their country. In addition, there are fresh translations of stories from Greece and China.

“Rescue Rangers” by Henry Lion Oldie (a pseudonym for the writing team of Dymtro Gromov and Oleg Ladyzhensky) is translated by Julia Meitov Hersey. Four people with special powers infiltrate a secret facility in order to obtain a computer disc that threatens the world. The story’s conclusion reveals why the characters seem younger than their stated ages, and why their mission seems both vague and stereotyped. The plot twist is cleverly done, although the reader may figure it out before it is revealed.

“Déjà Loop” comes from Greek author Kostas Charitos, and is translated by Dimitra Nicolaidou and Victor Pseftakis. People who can perceive possible futures, but only a few seconds forward, act as secret agents fighting terrorists with their special skill. The narrator accepts a mission to purchase a nuclear bomb and then arrest those who sell it. The plan goes awry when one of the sellers turns out to have the same power, leading to a seemingly endless stalemate.

The premise is interesting, and the phenomenon named in the title is an intriguing one. The espionage plot is melodramatic, and will seem familiar to readers who have followed the adventures of super-spies like James Bond.

“The Exclusion Zone” by Volodymyr Arenev, translated by Max Hrabrov, takes place after a war divided a land into two regions that are oddly out of sync. It is possible to travel from one area to another, but the process causes sickness. Some things, such as clouds, cannot cross the border. The plot concerns a man who journeys from one region to the other in order to visit his mother for her birthday. The conclusion reveals that the areas are even more strangely separated than the reader suspects at first.

As this synopsis may suggest, the premise is a surreal one, and is not always clear. It seems likely that the author was inspired by Russia’s aggression against Ukraine during the last few years, which divides two closely related peoples in a tragic and violent way. The resulting work is haunting, if confusing.

“The Immaculate Ivory Tower” by Li Huayi, translated by Nathan Faries, takes readers to the far reaches of the galaxy. Enormous creatures, some the size of cities, appear out of nowhere on planets throughout space. Their dead bodies produce useful fiber, and their gigantic tusks provide a building material of extreme strength. A researcher traces the origin of the beings to a star about to become a supernova, and discovers the disturbing truth about their extraordinary journey.

The author creates scenes of cosmic vastness that are awe-inspiring. Although clearly science fiction, the work has a mystical mood that suggests fantasy. This is essentially a puzzle story, although one with more emotional power than usual. The structure mentioned in the title allows for a rapturous description of its immensity, but is not really relevant to the plot.

Victoria Silverwolf hopes for the best for the people of Ukraine.