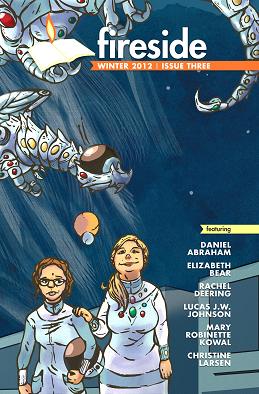 This issue of Fireside contains a collection of excellent stories from some well-known authors. Quite a pleasure to read.

“Form and Void,” by Elizabeth Bear, explores the gritty reality of how friendship can still appear to thrive, even in the absence of warmth and mutual respect.

“Before she turned into a dragon, Kathy Cutter was Comanche Zaripes’ best friend.” And with that first sentence, I was hooked, drawn into the roller-coaster ride of the often emotionally abusive friendship between the two girls as they grew up and ventured together into the depths of Jovian space.

Kathy was smart, flaunted her beauty and wore fancy boutique clothes, while Comanche was too smart and her family was always broke. Kathy collected insults, never forgetting or forgiving, jealously wearing the memory jewels everywhere. Everyone wanted to be Kathy’s friend, but Comanche was Kathy’s only friend because that’s the way Kathy liked it. The two girls were friends all the way through college, Comanche even picking the same astroengineering graduate program just to stay with her friend. And when Kathy announced that she would immigrate to Io, Comanche followed, leaving her family behind. At times, Kathy seemed to be kind to her friend, giving Comanche her old computer and allowing her to share her stateroom on the journey to Jupiter’s moon. But, when Kathy eventually decides she wants to transform herself into a dragon, a space-based cyborg that had once been human, Comanche knew that she couldn’t follow. In reality, their friendship had all been a mutually beneficial lie. Kathy felt that Comanche was the only one who had ever wanted Kathy for herself while Comanche “liked being the person who could walk with the dragon, even if she got a little chewed or scorched.”

“Liked walking with the dragon.” I wonder how many of us that describes. An excellent story and a definite must read.

Lucas J.W. Johnson’s “Remaker, Remaker” is an excerpt from the journal of a certified free-lance Remaker, Martin Fullius. Martin is well-known for his skills at crafting cyborg augments, especially for gladiators and the Roman military. But he wants to be able to remake the entire human body, organs, muscles, limbs, to vastly increase its capacity for power. With the financial backing of a mysterious patron, Martin pursues his personal research, designing, experimenting, then graduating to work on living subjects—dying soldiers, slaves, even a child. They all die, hard, screaming deaths; but Martin believes he learns from each and continues. Ultimately, his benefactor tasks Martin to remake his apprentice, a weak man sent to him by his benefactor. Martin succeeds, but only in a way that Dr. Frankenstein could truly appreciate.

Horrific, like a retelling of 20th century Nazi live-human experiments. I felt no sympathy for the Remaker and only saw the tale as a warning to modern-day geneticists, technologists and bioengineers who play with life, sometimes without regard for the well-being of the very ones that need help the most.

“John Fisher,” by Daniel Abraham, is an excellent ghost story, pitting the angry imagination of a young step-daughter against the safety of her new step-father. Except this 5-year old manages to bring a creature called John Fisher to life, communicating with him via her play phone. She doesn’t want John to hurt her mommy and gets increasingly upset over what John says he might do to her step-father. Then John appears in the step-father’s dreams, dreams with the full-flavor of nightmare, dreams that promise nothing good will happen when John comes to the house. One late night, John appears in the house. The man does what any good father would: he defends his sleeping daughter saying “if you get her, it’s because I’m already dead, motherfucker.”

All a little girl needs to know is that her father figure will protect her, no matter what. A must read.

Mary Robinette Kowal‘s “The White Phoenix Feather” is an absolute pleasure to read. Against the backdrop of a gourmet meal that’s a gastronomic delight, Viola must protect a client from large spider-like native ninjas while her client completes the ritualistic meal then eats a White Phoenix Feather. The feather is not really a feather. Instead, it’s a frond-like growth which native females called “samurai” because of their bladed arms that sprout only during mating season. Viola and her partner, Joe, have a contract with a local samurai to provide the occasional White Phoenix Feather to clients eager to indulge in an Extreme Dining experience. Much like eating fugu fish, the allure is in the danger, not from lethal toxins but from attacks by dog-level intelligent ninjas drawn to the pheromones emitted by the feather. The experience also allows the samurai to clear her stable of lesser males, a mutually profitable venture all around. Except the client violates his contact by telling his girlfriend about his plans to eat the feather. The ever-present ninjas learn about it, and now a different, and very intelligent, samurai seeks to acquire the feather, thereby allowing her to steal the entire stable of ninjas that would be drawn to it.

To enhance the atmosphere of danger, Viola must sit at the table looking decorative, protecting the client from repeated attacks without any weapons except what she can create out of table utensils, hot soup, pepper mills, a seeded baguette, hot fondue and various other items associated with the meal service. Her waiter is a true artist, who always has the right food or utensil for her when she needs it most. But it’s not the spiders that prove to be the greatest challenge for Viola, it’s her client–he’s crass and unappreciative of the exceptional nature of an Extreme Dining experience. In the end it’s only her pleasure in the subtle aromas of a single-malt Glenmorangie scotch that makes the evening worthwhile for Viola.

An exceptional tale and the ongoing descriptions of the various gourmet dishes enticed me in a way few stories can—through the sensation of taste. A must read.

Louis West. With a background in sub-atomic physics, astronomy, biophysics, medical genetics and international finance, Louis is particularly fond of hard SF. He critiques a broad variety of SF&F stories and volunteers at various New England-based SF&F conferences. His own SF writing explores the personal, social and cultural impacts of evolving nano-tech.