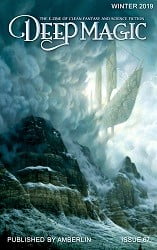 “Forged in Iron and Blood” by Jeanna Mason Stay

The latest issue of this self-described “e-zine of clean fantasy and science fiction” offers a particularly generous supply of reading material, with two full-length novellas, a novelette, a pair of short stories, and a trio of novel excerpts.

The protagonist of “Forged in Iron and Blood” by Jeanna Mason Stay is a former warrior, now living as a blacksmith. Her past comes back to haunt her in the form of a man who arrives at her smithy with a metal hoop around his neck. The object is full of evil magic, which enslaves the one who wears it. The man has escaped those who trapped him, and is now in agony and near death. The woman releases him from his bonds, but only at a terrible price. At the same time, she must avoid the wrath of the wicked men searching for their captive.

This is an expertly crafted story, with fully developed characters. The author is able to make the main character’s history come to life, without the need for excessive exposition. The plot is cleverly constructed, with a resolution that is both unexpected and logical.

The narrator of “A Power Arcane” by Caitlyn McFarland is a halfling, a diminutive being similar to one of Tolkien’s hobbits. After a difficult childhood, during which she managed to learn magic despite being a homeless orphan, she made a pact with three witches. In return for leading four adventurers to their doom, one of whom carries an item the hags require, she will acquire even greater magical skills. During the perilous journey to the lair of the witches, the halfling grows fond of her companions. She faces the choice of betraying them or losing the chance to gain the supernatural powers she strongly desires.

The narrator often speaks in an informal, modern style, which is jarring in an otherwise serious story. This is particularly inappropriate in a tale that takes place in the usual pseudo-medieval fantasy setting, and which features no human characters at all. In some ways, the plot resembles a session of the roleplaying game Dungeons and Dragons, and may seem overly familiar to many readers. Sudden changes in mood, from the truly horrific nature of the witches, to a touch of storybook romance, are not always handled gracefully.

In “Fire Wings” by Anthony Ryan, four very different people journey to the top of a high mountain, seeking to win back the honor they have lost. The viewpoint character is a warrior, racked with guilt after killing a reptilian opponent just as he realized it was a fully sentient being. The others are a magician; a member of a royal family; and a wandering adventurer. After a long, difficult climb, they reach a place where people ride on the backs of gigantic birds in order to keep back the evil creatures that emerge from a volcanic pit. Only by successfully bonding with one of the birds, and serving as its rider, can anyone exiled for a serious offense win freedom from dishonor.

This lengthy novella, nearly a short novel, details the backgrounds of the characters, their journey to the place of the flying warriors, their rigorous training, their bonding with the huge birds, and an apocalyptic battle with the forces of evil. The background is very complex and not always clear. The author maintains a consistent mood and has a gift for vivid descriptions. Some readers may be disappointed by the fact that one of the four characters introduced early in the story disappears quickly, and plays very little part in the plot.

(One technical problem, which may vanish once the magazine is available to the public, appears in the review copy. The place of the birds and their riders is always called the Eerie. It seems obvious that this should be the Aerie. The term occurs multiple times throughout the text, ruining the suspension of disbelief.)

This issue’s only science fiction story is “The Job Prospects of History Majors” by Alyssa Eckles. The protagonist works at a travel agency that sends people to the past inside protective shells. When the boss is away, he leads a couple and their precocious preteen daughter on an unauthorized journey to an ancient sea battle. Something goes wrong with the time machine, leading to a frenzied effort to return to the present.

There is not much to this story, the shortest in the magazine, other than its basic plot. The intent seems to be humor, although nothing particularly amusing happens. The character of the sassy, intelligent daughter may appeal best to young adults.

“Fairy Lights” by Laurie Lucking is a variation on the familiar story of Cinderella. The narrator is much more interested in mechanics than dancing, building a steam-powered coach so her stepsisters can attend the ball. The Mistress of the Fairies appears, selecting her at random to be arrayed in a beautiful gown woven by tiny fairies. The narrator discovers that the mute fairies dislike the cruel Mistress, who usurped the place of a kinder Mistress. While attending the ball and finding romance, she also plots to rescue the imprisoned former Mistress and free the fairies from their bondage.

The author plays games with various concepts from the old fairy tale in an imaginative way. The heroine is appealing, intelligent, and resourceful. The ending is a little too close to the original folk tale, and the love story is too sudden to be fully believable.

Victoria Silverwolf thinks the cover art for this issue is very beautiful.