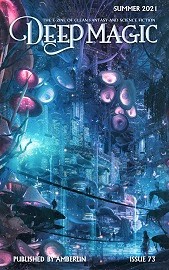 “The Turning Scourge” by Charlie N. Holmberg (reprint, not reviewed)

“What Waves Wash Up” by Alexis Kaegi

“Caretaker of Lavender Heath” by H. A. Titus

“The Falling of the Archeantus” by Jeff Wheeler

The last issue of the magazine offers four new short stories, as well as a novelette from the editor as a sort of farewell gift.

In “What Waves Wash Up” by Alexis Kaegi, a woman returns to her homeland after a long period of wandering, only to have her sister die soon after she arrives. She blames the death on a priest from another land. They both enter the sea in a ritual meant to reveal what really happened, depending on who floats and who sinks. The truth turns out to be more complex than either imagined.

The story is something of a murder mystery, complete with an unexpected plot twist, but it also deals with how our assumptions and misperceptions can lead us astray. The author avoids the one-dimensional characters and simplistic motivations that might be found in less thoughtful works.

“The War Within” by N. V. Haskell features a soldier and a sorceress, many years after they fled the king they served in order to be together. The woman’s magical ability to control wind, so powerful that she once destroyed entire armies, also causes her to lose her memory over time. Desperate to find a cure for her when she remembers almost nothing about their lives together, the man takes her to a monastery. The price for restoring her mind is a heavy one.

The story might be read as a metaphor for losing a loved one to the ravages of Alzheimer’s disease. Unsurprisingly, the premise has great emotional impact. The author walks a thin line between pathos and sentimentality, but stays on the right side of it.

“Caretaker of Lavender Heath” by H. A. Titus is a lighthearted tale narrated by a magical cat. The faery feline witnesses a young woman strike a deal with the pixies that intrude on her property. This brief, simple story may be too cute for mature readers, and might be best for youngsters.

“A Shelter in the Fog” by B. D. Weiss takes place after a war of magic leaves a deadly mist covering the land. A badly injured mage and a young woman struggle to survive, while fighting off a warrior of the invading army.

This is a dark, violent tale, with the feeling of grimdark fiction. The author creates a vivid portrait of a poisonous wasteland. Whether intended as an allusion to current events or not, the fact that the characters have to wear cloth face masks to breathe is obviously similar to pandemic precautions, and may ruin the otherworldly mood of the story.

The issue’s only science fiction story is “The Falling of the Archeantus” by editor Jeff Wheeler. After an attack by an overwhelming force of invaders wipes out the space armada defending a planet, a commander and a young pilot manage to escape. They journey from one part of the cosmos to another, escaping the ruthless enemy and searching for the admiral of their fleet. After many dangerous adventures, they find refuge.

This is old-fashioned space opera of the Star Wars variety. The heroes are pure in heart and the villains are completely evil. Some readers may appreciate the slam-bang, action-packed pace of this adventure yarn, but many will find it shallow. Unfortunately, the author chooses to end the story with an extremely clichéd plot twist, one that has become an infamous symbol of corny SF.

Victoria Silverwolf wishes the editor well in his future endeavors.