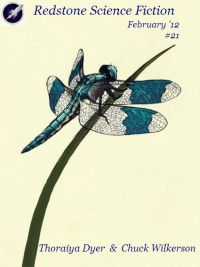 “White Lies” is a clever extrapolation of the wired society, positing a world where everyone has a computer connection in their head. Brian is on a trip to China, where his network node doesn’t work because of an incompatible network, and is faced with a problem.  He has fallen in love with Felicity, who checks everything on the web. Brian has told a few white lies in their relationship, and is terrified that she will find them out.  So he sets up a plan to save their romance.  Thoraiya Dyer moves away from the familiar by having this network being used not just for facts, but as a giant social network where the truth is determined by consensus.  There is a second subplot that I could have done without, since it opens cans of worms outside the scope of the main story, but the story has some good twists and turns and the ending is a nice dose of irony.

Lily is the title character of “Dragonfly Girl,” a ten year old who has the ability to understand and communicate with insects.  Chuck Wilkerson‘s story is primarily about the relationship between Lily and her mother, who is very understanding about what is happening.  It’s a sweet story that concentrates not on the fantastic element, but rather on the relationship between the two, both of whom are well drawn and sympathetic.

The stories this month were both worth a read, with some excellent strengths and good writing. 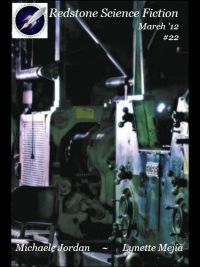 Some science fictional themes never die, but still I was surprised to see that Redstone was using one that dates to at least 1938.  “I Will Love You Forever” is about David, who is scouting a colony world with Kim, who he has fallen deeply in love with and wants to remain with even though he is given a chance to return to Earth. There is, you see, something different about Kim, but the two of them profess their love — until fate has its way.  Michaele Jordan takes the theme and — well, really doesn’t breathe new life into it, but still makes it work.

Years ago, I owned an old Doctor Who program guide which had a glossary entry that read,  “Black Holes:  Always trouble.”  “Steady State” by Lynette Mejía brought that to mind.  It tells about Adam Steward, who is the only crew member of the ship Vitruvius, which is going to a black hole.  We slowly learn about Adam and discover he has suffered through a terrible experience that makes him want to go there.  The story is not a bad one, but uses the standard pushbuttons to make us sympathize with Adam, and the ending basically has Adam achieving his goal without any complications (though it does avoid my bete noire of futility).  I would have preferred something more unexpected or difficult.

This particular issue of Redstone is sticking with tried and true SF and literary tropes.  They are handled adequately, but I would have preferred something a bit newer, or at least with a newer twist on them.