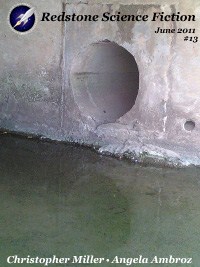 “An Infallible System of Roulette” by Christopher Miller is an exploration of the multiple realities implicit in the idea of a quantum multiverse, as illustrated through the many deaths experienced by the protagonist and his son. They include a drowning, a farming accident, and being squashed by a bus. In his current reality, an elevator accident didn’t kill, but made him an amputee. He sees it all through the quantum lens. When he puts his savings on a single spin of the roulette wheel, he also puts his worldview to the test.

I can’t say I hung on every word, but I did find this to be a unique and interesting treatment of an SF staple.

In “Love and Anarchy and Science Fiction” by Angela Ambroz, our hero reminisces about life with Salvatore Gennarino, the Tibetan Freedom Fighter. They inhabit a universe of many planets within one empire. Each world is dedicated to a specific ethnicity. Positions have hardened, enemies are for life, and any cooperation seems hard won.

I found this quite readable, redeemed by its exploration of culture and prejudice.

Both tales contained ideas interesting enough to make the read worthwhile, although I won’t be putting them on the favorites list.  I found them too disjointed and existential for that. As I’ve mentioned before, this tendency to put out chunks of story—some assembly required—is not one I appreciate. Despite that, these stories are still decent.

Among both SF magazines and ezines, Redstone SF remains my number one choice, well ahead of the pack. Congratulations, Redstone SF, on your recent receipt of SFWA designation as a professional market.  It’s well deserved.