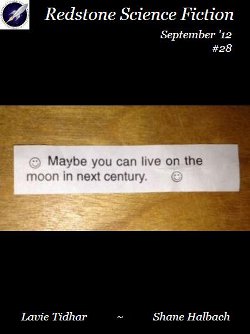 “Earthrise” by Lavie Tidhar tells us of life on a populated moon, a place where people live and work, where tourists come to spend their money and watch the earthrise.  We see the moon through the eyes of the admirers of Sandoval, an artist who dared to live his life on the edge, unconnected to any network.  When Sandoval meets the outlaw Rohini, art and crime truly collide.  Together, they push the artistic envelope, or so the legend goes.  It’s said he created by stealing the thoughts and memories of others, and by misusing tech.  Ultimately, Sandoval himself became art, when his legend outgrew the man and took on properties of its own.

This story is the winner of the Show Us a Better Way contest, in which Redstone asked for stories that “provided a hopeful future made better by scientific advancement.”  I like the idea of trying to breathe new life into short fiction, and applaud the concept behind the contest.  I have to admit, though, by about a quarter of the way through this story, I was bored.  If you’re a fan of literary fiction, you might enjoy it.

Chrysanthemum  is a scientist in “My Heart is a Quadratic Equation” by Shane Halbach.  Although she dates men on a regular basis, we’re not really sure why.  She definitely has no interest in them, except as potential test subjects.  Chet ends up in her lab that way.  Strangely, he seems to have no objection.  When she meets Albert, everything changes.

If you enjoy absurdism, you might like this.  Occasionally, I find an absurdist piece I think is marvelous, but most just leave me scratching my head.  This one was no exception.

Redstone is apparently going on hiatus.  Why, or for how long, the website doesn’t say.  It will be missed.