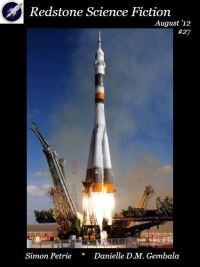 “The Man Who…” by Simon Petrie
“The Dorsal Wake” by Danielle D.M. Gembala

The two stories in Redstone Science Fiction’s August issue are surprisingly similar in setting and structure. Both feature a space ship in the outer planets on a mission for bosses that have been oppressing the characters for years.  The crew is faced with a problem that ends up giving them a victory over their bosses.

“The Man Who . . . ” is set in the Kuiper Belt, where Sylv and Trace are snowflaking — grabbing minor asteroids and comets for their ice, which their boss Herriman sells to Mars.  Sylv slows the ship to investigate a minor mystery, one that Trace doesn’t seem to think is worth their while.  The problem with Simon Petrie‘s story is that the mystery is downplayed (Trace, the narrator, doesn’t think it’s important) and the solution comes out of nowhere.  There’s no suspense or any worry about what’s going on; it’s all just presented to the reader.  While the setting is interesting, I think the mistake was having Trace — who knows nothing about what’s going on — be the narrator.  Everything needs to be shown to him after the fact, since Sylv doesn’t tell him what she’s up to.

Danielle D.M. Gembala‘s “The Dorsal Wake” postulates a society where whales are sentient and the overlords of Earth.  The Dorsal Wake is a ship manned by humans that has suffered an accident and is working to get a rescue from the uncaring cetaceans who are in charge.  Dr. Liu comes up with a plan to make it work. The problem with the narrative is similar to that in “The Man  Who …” in that they discover a solution that works out without any hitches. The worldbuilding here is first-rate, but there is too much of a change for a short story, and the ending brings in things that come out of nowhere.  We don’t know enough of the society for the ending to have much meaning and it reads like “Oh, by the way, by doing this we win the lottery” when the reader didn’t know that they even bought a ticket.  The world portrayed here is worthy of more than just a short story, and the story has some urgency to it, but it has a solution that reminded me of  A. E. Van Vogt’s “A Can of Paint” in that it was logical but still came out of nothing.

If you like worldbuilding, this issue has plenty, but the rest is routine.