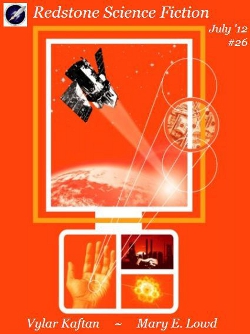 “Skin Deep” by Vylar Kaftan
“We Can Remember It For You Retail” by Mary E. Lowd

According to her biography in this month’s Redstone, Vylar Kaftan has had many stories published in a variety of highly visible publications, yet somehow I’ve managed never to have read a story of hers before now. I’m glad my latest review assignment corrected that oversight. Her “Skin Deep” is a harrowing and visceral war story that recalls Joe Haldeman. The soldiers in this story are encased in computer-controlled, symbiotic combat suits, “Skins,” fighting a grisly battle against an almost-unseen alien menace. Because the enemy can control the minds of the soldiers, their suits monitor and control the senses of their wearers and have taken over decision making, leaving their wearers little more than meat filling out clothing with a mind of its own. The protagonist of the story has, he reports, a good relationship with his Skin, “Bastard.” Bastard lets him know the date, sometimes, and even lets him out – in a controlled, inescapable environment – to interact with another soldier during a rare encounter.  But in most ways the soldier is frightfully alone, fighting blind, unaware of the progress of the war, of his surroundings, of anything extending beyond the most immediate and basic impressions. It’s the most brilliant literary metaphor I’ve come across in ages. The Skins physically, gruesomely demonstrate the tragedy of the unknown and unknowing soldier fighting in mindless squalor, lost in the pointless brutality of war, numb and long since detached from any cause. Even more, Kaftan’s Skins encapsulate the loss of humanity required by and resulting from war. The imagery, like the story, is unforgettable.

“We Can Remember It For You Retail,” by Mary E. Lowd, is even more reminiscent of a past master. As if the title weren’t enough to alert you to the fact that this story is a take on Philip K. Dick, the story revolves around its central character, Dylan, sitting in a coffee shop with his date Charlene discussing the movie they’ve just seen: Total Recall 3. The discussion is somewhat hampered by the fact that Dylan, who can’t really afford his regular movie nights with Charlene, only purchased the right to watch the movie – not the right to remember it. Further hindering his conversational abilities are the constant advertisements playing through Dylan’s senses in exchange for the meagre sums paid into his account by the advertisers. While it’s hardly realistic to imagine corporations paying us even a pittance to be subjected to their intrusive adverts, it is the kind of thing we’d expect to see (and maybe already have) in the works of Philip K. Dick as he, like Lowd does now, explores the pervasiveness of capitalism and marketing. Also following the fashion of Dick, Lowd’s protagonist is an everyman – uncertain, bumbling, and inescapably drawn to the wrong decisions. He’s sympathetic, up until the point where you’re ready to strangle him. The story is colourful and sometimes funny, but in the end – unless the author is making a subtle and complicated point about the intertextuality of modernity and the individual’s inability to understand life except through the medium of popular cultural referents – is too dependent on references to make much of an impact on its own.