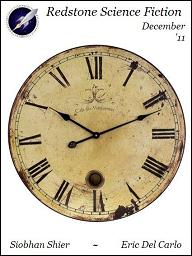 “Hacker” by Siobhan Shier
“Time, Like Blood, on My Hands” by Eric Del Carlo

With just two stories, this latest issue of Redstone SF can’t exactly be said to have something for everyone. I find online magazines difficult to read, with their narrow central columns of text flanked by columns of advertisements and links, and the typical online format: space between paragraphs, even single lines of dialog.

But of course a good story should be able to surmount any quibbles with the format, shouldn’t it? Or maybe you can’t teach an old reviewer new tricks. We’ll see…

The first half of Redstone’s science fiction double feature is Siobhan Shier’s “Hacker,” a story about the possible consequences of the integration of human minds and AI technology. It’s an interesting take on one of the most unquestioned elements of cyberpunk dogma: in the future, our minds will be augmented by computer hardware and software. So what could a talented hacker do with this situation, hm?

The hacker of Shier’s story, Blanche, makes the man of her dreams, using her facility with programming first to ensure the man she wants falls in love with her, and then to shape him into exactly the successful, docile man she wants him to be. The story contains ominous indications that what she’s done hasn’t just been to give her the life she wants but to assist an organization recruiting – and creating – “the right kind of people.” People who will change the world, to an end not explored in the story. That kind of openness, of ambiguity, always intrigues me in a story: I like the fact that “Hacker” examines paranoid fantasies about controlling society through a simple domestic situation. This deft and indirect handling of a vast concept, however, makes the story’s one major weakness stand out all the more: the fragment of his smashed guitar Blanche’s husband (significantly, he never gets a name) finds, precipitating a minor crisis involving his suppressed traits and memories, just screams “plot device!” Given the obvious competence of Blanche, there’s no way she would have left a piece of her husband’s old guitar on the floor – and that minor failure detracts from her sinister efficiency. But there are plenty of subtle and disturbing touches throughout the story to more than balance this one shortcoming.

Redstone’s second offering is “Time, Like Blood, on My Hands,” by Eric Del Carlo, an almost impossibly strong story about social life after an event called “The Fracture” separated humanity throughout time. The protagonist, Sid, still lives with his wife Dolores, but they haven’t seen each other for years because they exist, like so much of humanity, split seconds apart. It’s a brilliant premise, and the execution is even more spectacular: Sid’s world of lonely spaces, new social conventions and emotional trauma is powerfully real, sketched with conviction and subtlety. Absolutely everything in this story rings true, from the awkwardness of Sid’s seduction by Carey to his difficulty remembering his past, the strangely blurred clarity of all his recognitions. The only weakness in this story is a completely unnecessary expository paragraph about The Fracture, about which the reader will have gathered everything necessary just by reading the story. No explanation was necessary. A story this superb can only be blunted by explanations; everything that needs to come through does, in the dialog, the casual descriptions, the interactions of the characters. Fortunately, the ending is so breathtaking as to banish quite rapidly any disappointment about one needless paragraph. So perhaps Redstone does have something for everybody, after all.