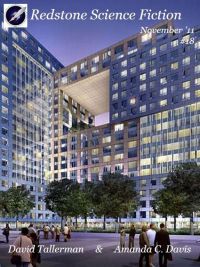 “Passive Resistance” by David Tallerman
“On the Sabbath Day Be Ye Cleansed” by Amanda C. Davis

Redstone Science Fiction is a nice-looking little e-magazine that’s been operating for a while now, putting out eighteen issues. In internet e-magazine time, that’s practically forever. In that time, the magazine’s put out some pretty nice stories, so I was looking forward to being able to read some more this month.


The issue opens with “Passive Resistance” by David Tallerman. For a meditation on the usefulness of pacifism, this story begins with an interesting dilemma: How do you get away from a sniper who has just shot your bodyguard?


In the case of Alec, a UN representative and speaker at a disarmament conference and a vociferous pacifist, that is not really an academic question. When he’s in Berlin to speak at a conference that could result in the unilateral disarmament of many nuclear countries, Alec is attacked, his bodyguard killed, and pursued by relentless killers who don’t want him to talk at the conference.


Alec’s bodyguard sends a dead-man message into Alec’s head with after-the-last-minute instructions on how he thinks Alec might survive, as well as files he says are military dirtware that will teach Alec’s subconscious mind to defend his body. All of which are against his pacifist principles.


The question asked of every serious pacifist is whether he or she would act if his or her life was threatened, the lives of children or spouse threatened. According to Alec, he would not use violence. Of course, he is given the chance to make that choice.


I’m having a hard time discussing the issues raised in this story because to do so in the thorough manner they deserve to be discussed, I would have to violate my own principles as a reviewer and spoil a very large part of the climax of the story.


Suffice to say, I thought this was a difficult story in that I’m not sure the deck wasn’t stacked against a certain side, and stacked quite deliberately, almost as if setting up a straw man and then glorying in knocking it down. The story was written in a competent manner, kept me interested and reading, but still. . .


I’d go ahead and recommend that you read this, if only so you can get your own sense of what the debate was really about. You might not end up liking the story, but I’m pretty sure it will at least leave you thinking about why or why not.


“On the Sabbath Day Be Ye Cleansed” by Amanda C. Davis is another story that will leave you thinking. On a distant planet, the people gather in front of the Temple, awaiting their Purge. They wait with their week-wives and week-husbands for the Purge to take away their sins, to clean their bodies and their homes, and to take away their memories, restoring them to the sin-free state of purity they need.


When a priestess comes out and tells them that the Purge will not be happening, the people are herded back to their homes, filled with the trash of the previous week, almost emptied of food, and frighteningly familiar. Worst of all is the thought that sins now have consequences that might last beyond the next Purge, if there is one.


The people do not have showers and do not know where their food comes from, only that they awaken from the Purge clean and with fully stocked larders. Tagon and Riia are week-spouses, both afraid when they realize their memories are now nine days long and likely to get longer. They go to search the exterior of the Temple, hoping to find a way in to see the priests.


Once Tagon enters the Temple, he finds a priestess and realizes that the people will be abandoned by the priests. He is offered the choice of staying or going with the priests into the wider universe outside.


The story was really interesting. The way Davis equated sin with actual, physical dirt and the accumulation of garbage was, if a bit literal, something that actually worked in this story. Despite, or perhaps because of, their state of near tabula rasa, the characters’ plights were especially touching.


I found myself following along with their attempts to grope their way to understanding, when they had only the basis of a little over a week’s life experience to help them. While the story and the plight were nice, I had a bit of a problem with some of the worldbuilding aspects. For instance, I couldn’t ever get a real sense of why the people were on the colony and why the Purge even took place at all.


The author seemed to be going to a lot of trouble for very little return. The Purge system didn’t seem to make much sense to me, given the rationale that this was supposed to have something to do with money.


Still, even with my reservations, I’d say this was a story worth reading.