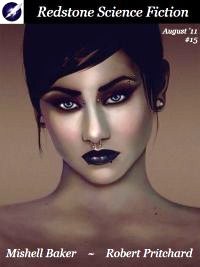 Redstone SF features two stories that just didn’t impress me, partly because they were too obscure and murky about what they were trying to do.

Mishell Baker‘s “Vaporware” is the greater offender.  As far as I can tell, it’s about Max, a man who is having issues with his rebellious teen daughter, Kestrel, who is something of a spoiled brat.  In a way, I can understand this, since Max is very weak-willed and unwilling to mete out discipline, while his wife Emma overreacts in a way that seems to give Kestrel ample reason to act out.  But the science fictional aspect is that Max is obsessed by various other versions of Kestrel, either embryos who may still live or characters on a computer simulation, aging at a normal rate as he watches them grow up.  I think.  There’s plenty the story doesn’t explain, which is OK, but nothing important to the situation is ever made clear.  Baker is heading for an emotional climax, maybe, but it gets buried in the murk and it’s not at all clear what the ending is supposed to mean.  The characters and situation are just too opaque for me.

“Evoë! Evoë!” is cogent in comparison, even though it’s still all over the place.  People talk fluent paradox to each other as though they are reaching deep truths, and the main character is as colorless as desert sand.  It’s about a man who goes to Taurine City to investigate some crime that may be a kidnapping or maybe a murder and meanders around leaving him wondering if he’s investigating or if he’s the one who was kidnapped.  It seems that Robert Pritchard is straining a bit too much to say something important.  It doesn’t help that none of his characters show any sign of personality or that nothing about Taurine City is actually described.  Too much of the dialog reads like bad fortune cookies and there’s Tarot involved, which I don’t find a good sign.