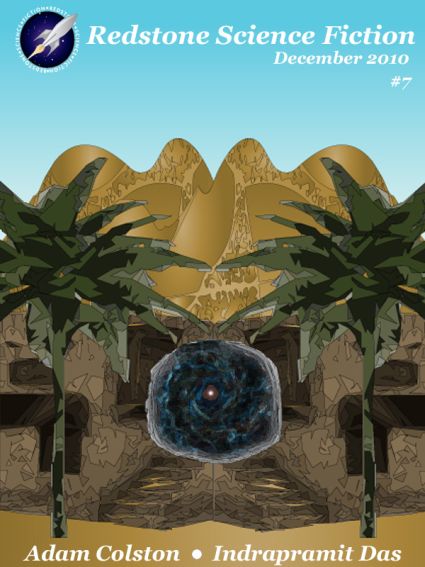 In “Paradoxically Correct” by Adam Colston, Steve Orbison-Daltrey has stolen a chrono-gen to go time-travelling, back to Jerusalem in the days leading up to the crucifixion.  Things don’t work out exactly as he plans.  He can’t resist doing a few tricks.  When he provides Jesus with a spare chrono-gen, Jesus uses it to go forward in time.  The universe puts Steve in his place.  Steve is forced to play the role, counting down to the big event with the cross, while his friend Andy and the folks at Chrono-Central try to find a way out of the mess.

It’s a good tale, with an interesting premise, some humor, and a strong finish.  Colston’s technology is inventive, very different from the standard gadgetry, but he doesn’t make the mistake of allowing it to become the story.  In the world of SF, that’s a refreshing change.

“Looking the Lopai in the Eye” by Indrapramit Das tells of Alwaea, on her way to Earth.  She’s the ambassador to her people, seeking independence for her small world.

Obvious parallels can be drawn between the story and English colonialism in India.  It has some nice imagery.  There are also some poorly structured sentences, such as:

When she first saw Earth through the portholes, it almost felt like she hadn’t slept for years, nurtured by robots, while her vessel folded space around itself.

It’s short, and lacking in plot development.  I know literary aficionados believe plot to be optional.  I don’t.

With this edition, Redstone continues to be one of the stronger contenders in the marketplace.  It compares favorably against both its online and print competition.