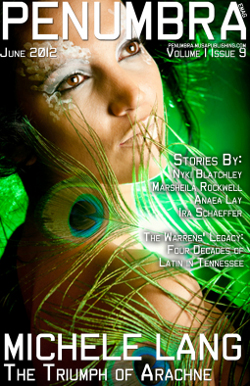 Penumbra #9, June 2012
(Greco-Roman Mythology issue)
“Nemesis: The Case of the Hellhound” by Nyki Blatchley
“The Triumph of Arachne” by Michele Lang
“On Moonlit Wings” by Anaea Lay
“Epidora” by Marsheila Rockwell

In “Nemesis: The Case of the Hellhound” by Nyki Blatchley, Sam Nemesis is a detective presented with a new case by none other than Hades himself.  Herakles has kidnapped Cerberus, and Hades wants Sam to get his dog back.  Hot on the trail, Sam checks in with Charon, who confirms that Herakles stole the animal.  With his assistant Hekate at his side, Sam heads for the Underworld to do more sleuthing.  Following the clues, he finally catches up with the hero.

This is the lead story in the first issue I’ve reviewed of Penumbra.  So far, it’s two thumbs up, a fun tale and a fresh voice.  Although I found the climax of this one a bit of a letdown, not strong enough to carry its big buildup, it’s still a clever spin on an old story.

Clea is working aboard a spaceship in “The Triumph of Arachne” by Michele Lang.  Though her lab is supposed to be sterile, a spider has found its way in.  Clea discovers she can talk to it, and hear its warning.  Like the ship, the spider is also Arachne, the same one who offended Athena and ended up transformed.  It warns Clea that she faces a similar fate, that her mentor is not her friend.  Sure enough, Clea finds that the ship’s self-destruct sequence has been activated, and she can’t turn it off.  If she’s to save herself and the rest of the crew, she’ll have to be both bold and creative.

Again, this is a unique and clever twist on an old story.  It fudges the details, too vague to be really satisfying, but is still a good tale.

Anaea Lay recreates the story of Icarus in “On Moonlit Wings,” and mixes it with the tale of the Minotaur.  Icarus and his father Daedulus, lifelong prisoners of the maze, find that flight is their only route of escape.  They build sails from what they find within the walls, until Icarus sees his chance.

This one hits different myths, but doesn’t seem of the same quality as the others.  It feels disjointed and doesn’t offer much in the way of new ideas.  The ending carries a “you already know how this goes” aura of defeat.

Ares and Eris are annoyed when they aren’t asked to contribute any talents to the shaping of Pandora, the first woman, in “Epidora” by Marsheila Rockwell.  In retribution, they come up with their own plan.  They present an alternate woman as proffered bride to Epimetheus.  Though Epidora isn’t lovely and has none of Pandora’s gifts, Epimetheus weds them both.  Neither woman is pleased with the outcome.  In that famous box, the one they aren’t supposed to open, Pandora sees an opportunity to be rid of her competition.

This slow starter is somewhat heavy-handed in its approach.  It flows nicely, has a decent plot, and reaches for ideas that go beyond the confines of the tale itself.

Overall, I’m impressed by Penumbra.  How lovely to find a magazine of professional caliber that doesn’t fear humor, and is willing to boldly lead to where the others should be.  If you’re wondering whatever happened to short fantasy that deserved the label ‘story,’ look no further.