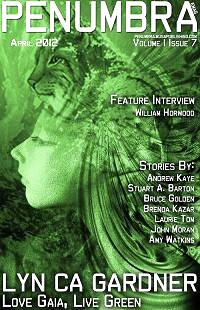 “Astray” by Bruce Golden
“And So I Awoke And Found Myself Here By The Cold Lake Side” by John Moran
“Amazing Incredible Sea Mongrels” by Brenda Kazar
“Love Gaia, Live Green” by Lyn C. A. Gardner
“The White Snake” by Laurie Tom
“The Second Coming of Thogradorax” by Andrew Kaye
“Carniphobe” by Stuart A. Barton

Penumbra crams quite a few short stories into its electronic pages, which seems a rarity for electronic journals. The PDF magazine more closely resembles the publications of my past than does the purely online magazine and presumably there’s something about the format and the production process that makes it possible to produce a larger product. It’s attractive and presents the reader with more variety but, as usual, it’s quality that counts. Penumbra  pays professional rates and features monthly, themed issues, and this issue is constructed around the theme of animals.

Bruce Golden’s short opening piece, “Astray,” anthropomorphises a pod of whales, telling the story of their mysterious beaching as a misguided religious exodus. What starts out reading like a retelling of the settling of the Americas culminates in something more like the Jonestown tragedy. At another time I probably wouldn’t have thought much of it, but with fundamentalist clamourings so prevalent now it serves as a cautionary parable about self-destructive fervour. The main problem with the story is that it wouldn’t work at all without the explanatory newspaper clipping about a beached pod of pilot whales. I’m sure it would have been possible to build enough clues into the narrative for the story to function without external explanation.

“And So I Awoke And Found Myself Here By The Cold Lake Side,” by John Moran, is a haunting and enigmatic story about a lake-creature that shows itself, in rare instances, to desperate people in need of comfort. How much of a favour it’s really doing them is debatable, as they return to the lake, again and again, hoping in vain to see it again. It’s a touching description of human need, misplaced desire, and the inability to connect to the real and possible.

Speaking of water creatures… Brenda Kazar’s “Amazing Incredible Sea Mongrels” is a bit like Gremlins, a tale of novelty pets gone mad. It will be hilarious for anyone, like me, who remembers the “sea monkeys” fad of the 1970s, but for others it might seem derivative and undistinguished. Since I’m in that lucky age group I found the story funny and grotesque, if too long. It’s always comforting to find writers with the same generational memories, and the quirky imagination to do something with them.

I’m not sure what to make of the issue’s centrepiece, Lyn C. A. Gardner’s “Love Gaia, Live Green.” It’s a well-written, emotional and evocative story about a world in which humans and animals alike are governed by rules, written and enforced, of course, by humans, meant to ensure environmental harmony. All creatures wear collars which translate, regulate their interactions, maintain the peace. It seems idyllic until Toni encounters a lynx that has slipped its collar, and finds herself drawn into contemplation and experience of nature as it was before being remade to conform to a human conception of harmony. It’s fine reading, but what is being said eludes me. I’m not sure if we’re supposed to find this new state of things abhorrent or laudable. The story doesn’t provide enough background to judge, but perhaps no amount of information would make judgment any easier, and maybe that’s the point.

Laurie Tom’s “The White Snake” stretches the boundary of the themed issue a bit; the snake of its title isn’t actually an animal but a spiritual being from the east whose form is that of a snake. Saved by a boy from the cruelty of other children, the spirit watches the child as he grows and eventually sheds its snake appearance to live with and love him. The story is well written and touching (although I might have found it more touching than other readers would have, due to my fondness for snakes), but I’m not sure it’s very original.

“The Second Coming of Thogradorax,” by Andrew Kaye, also feels like it belongs to a different magazine. Do kaiju really count as animals? But I’m thankful for whatever editorial decision granted Thogradorax animal status, because Kaye’s written a fun story about the monster. It’s a rampaging kaiju story set in Virginia, told from the point of view of a child enjoying the novelty – and most importantly, the school closure – of the monster attack. The writing blends innocent exuberance with nostalgia and creates a likeable protagonist with a believable viewpoint.

Penumbra’s animal issue closes with “Carniphobe” by Stuart A. Barton. Overall I think the issue would have been better served with a different closer. Barton’s story, about genetically modified chickens on the rampage, is funny and entertaining, but not exceptionally well-written. It offers no explanations and precious little in the way of character. It is what it is: a story of murderous chickens with inexplicable powers. If that’s enough for you, you’ll find it enjoyable. I certainly did. But it’s also rather slight. It would work very well in a night of spoken word, but to close out a themed magazine I’d look for a story that leaves the reader thinking as well as chuckling.