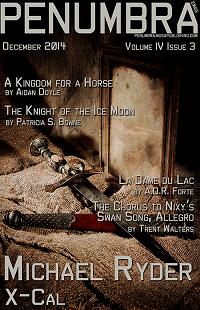 “La Dame du Lac” by A.D.R. Forte
“The Chorus to Nixy’s Swan Song, Allegro” by Trent Walters
“X-Cal” by Michael Ryder
“The Knight of the Ice Moon” by Patricia S. Bowne
“A Kingdom for a Horse” by Aidan Doyle

For this issue, Penumbra’s last, the theme is “Arthurian Legends.”

A.D.R. Forte’s “La Dame du Lac” starts out the issue with a story that hews to tradition and tells us of Sir Lancelot’s fostering by Vivaine, the Lady of the Lake. Through her eyes, we watch Lancelot grow from a boy to a young man who hopes to make of his life a legend rather than a fairytale. Rather than a top-to-bottom linear tale, Forte gives us glimpses into Vivaine and Lancelot’s life at various points. These vignettes are designed to make anyone not familiar with Arthurian legend curious about these people. The author’s note at the end of the story gives the tale’s historical literary context.

In “The Chorus to Nixy’s Swan Song, Allegro” by Trent Walters, we are treated to five different perspectives on a sequence of events. We begin with the miller who bargains with a nixy: the miller will give up the youngest thing in his house in exchange for a magic coin from the nixy which will allow him to regain wealth he lost to the gambling tables. Only after he has won big do we learn that the “youngest thing” in question is the son his wife has just birthed. Next we learn the nixy’s side of the story. She was Merlin’s lover, and after he regressed from a man to a boy who was lost to her, wants the miller’s boy to raise as her own son. Then we hear from the miller’s son, son’s wife, and the witch who brings the tale to its dénouement. In its own way, this story also keeps to tradition—that of magical creatures and their deals with humans.

Merle, the narrator of Michael Ryder’s “X-Cal,” is a building owner who rents a floor to coders Art, his girlfriend, Gwen, best friend, Lance, and friends, Gow, Ghal, and Percy. The coders are working on a quantum computing project. Merle takes to hanging out or coming around with increasing frequency because he enjoys the kids’ company and Art tells him that his presence is “magic.” One night, Merle stops by to find Art the only one there. Merle suggests that Art take some time out and catch a shower because he’s been cooped up so long he reeks. This contemporary retelling hits all the salient points of the relationships between these characters.

The regal main character in Patricia S. Bowne’s “The Knight of the Ice Moon” is not Arthur. Rather it is King Bilinas whose tourney for the Ice Moon is visited by an unspeaking knight and his sister. Through the sister, the court learns that the knight is cursed and must have the curse lifted before the Ice Moon wanes or else he will die. Bowne then takes us on the journey of hunts and feasts and jousting before giving us the satisfaction of an ending that is as surprising as the knight himself.

Aidan Doyle closes the issue with his story, “A Kingdom for a Horse.” Garrett, a lowborn who considers himself the greatest knight in the kingdom, is tasked by King Arthur with killing the black knight’s horse. He has qualms about dispatching the magnificent beast. When the horse speaks to his mind and makes him an offer whereby he will receive the recognition and accolades he feels he deserves, Garrett accepts. This is another tale about the dealings between magical creatures and humans.

With these stories, Penumbra delivers its swan song and rides off into the sunset. We will miss you, Penumbra, and wish everyone who has been involved with the publication the best.