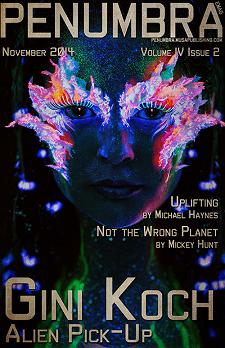 This issue’s theme is “Aliens.”

Michael Haynes brings us gift-bearing aliens in “Uplifting.” These alien gifts, new geometric structures, appear at various locations on Earth out of thin air. Each new offering requires the solving of increasingly complex puzzles in order to gain entry and earn the prizes within. As humanity overcomes suspicion and caution in light of the new arrivals, our societies and cultures become dependent on the alien gifts. A nice piece of flash fiction that suggests we beware of not only Greeks, but also aliens bearing gifts. Unfortunately, the aliens themselves never appear in this story—just their gifts.

“Alien Pick-Up” by Gini Koch begins with this preface: “Note for readers of the Alien/Katherine “Kitty” Katt series– this story takes place between the events of Alien Collective and Universal Alien.” This appears to be shorthand for: this tale’s target audience is readers already familiar with the Alien/Katherine “Kitty” Katt series. The story itself involves Vance Beaumont running a James Bondesque errand to discreetly pick up something for his good friend, Ambassador Kitty Katt-Martini. In this particular tale, the aliens are little more than background noise.

In “Not the Wrong Planet” by Mickey Hunt, a space exploration team discovers life on another planet. The inhabitants appear to be humans living time backward to the astronauts. Interesting relationships are revealed when the explorers and the natives meet. The term “alien” is loosely applied here as meaning: other than “normal” Earthlings.

For an issue purportedly about aliens, none of the stories here, all featuring humans with aliens either as backdrops or as alternate versions of humans as we know them, live up to the “aliens are compelling, fascinating, frightening,” statement that Guest Editor Damien Angelica Walters makes in her “Notes from the Editor.” Any of those—compelling, fascinating, or frightening—would have been a more interesting read on this theme.