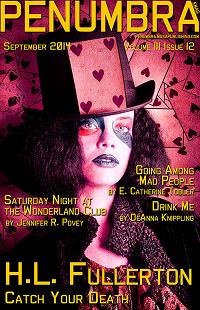 “Catch Your Death” by H. L. Fullerton
“Saturday Night at the Wonderland Club” by Jennifer R. Povey
“DRINK ME” by DeAnna Knippling
“Going Among Mad People” by E. Catherine Tobler

This month’s theme is Lewis Carroll. (The editor said that they were looking for stories that explored the “darker side” of Alice in Wonderland, as opposed to the more whimsical.)

“Catch Your Death” by H. L. Fullerton tells the story of Emma, a rather precocious and impetuous child, with a vivid imagination. Her exasperated mother, facing a day filled with Emma-stress, decides to drop off Emma at a place called “Eternity’s End,” so she can get her errands done while Emma entertains herself. This place is apparently an abandoned park with a small lake, but in Emma’s world it is full of trolls, nearly drowned kittens, and other crazy things. She has adventures with the trolls, and her mittens, which have become like multi-colored sheep. After a day of adventure, Emma returns to the gate, and to her mommy. The way the story ends lends one to believe that Mommy may have had more in mind for Emma than just adventures. This story certainly captures the bizarre feeling of Carroll’s Wonderland, and definitely has a dark feel to it. It took a second reading for me to see beyond the surface to the truly disturbing level underneath.

“Saturday Night at the Wonderland Club” by Jennifer R. Povey is set in a dystopian near-future, where you are either a ‘corp’ (working for, and pretty much owned by a corporation) or you are one of the street people – unemployed, living in a slum, forced to look for jobs that aren’t available, and obey the laws, lest you end up with a wiped mind, and as a corporate possession. The protagonist is Katya, a street person and a poet, who is headed for the Wonderland Club – a sort of speak-easy, since alcohol is illegal. There is a raid on the club, and Katya finds a “rabbit hole” – a door into another building that has several printing presses (also illegal). And, unlike Carroll’s Alice, Katya returns to this rabbit hole, for a fitting end to the story. Povey uses many nods to Carroll’s work– besides the “rabbit hole,” there are references to a tea party and bottles labeled “drink me.” While these references fit the story well, it could have been written without them and been just as effective, though the parallels between Alice and Katya would have been lost.

“DRINK ME” by DeAnna Knippling is a very dark foray into this issue’s theme. Though I found it hard to follow (some of the descriptions weren’t immediately clear to me), it rates very high on the ‘creepy’ scale. It’s a first person narrative, and the teen-aged protagonist is meeting a friend in a storm drain, in order to deliver some drugs. He finds his friend, but she is not in good shape, and there are other things in the storm drain as well – very weird and freaky things. The two have a conversation, and our narrator delivers the pill (or should I say, the “Drink Me” bottle?) and the story ends. The cryptic last line fell flat for me, but the story was otherwise suitably dark and certainly had the crazy feeling of a twisted Wonderland.

“Going Among Mad People” by E. Catherine Tobler is a brief glimpse into a day spent with an old woman named Alice, and her son, Caryl (which I assume is a homonym for Carroll). Alice likes to spend time in the chimney, with a caterpillar that smokes a hookah, and she is surrounded by stacks and stacks of teacups. Caryl is trying to tidy up, in preparation for a visit from someone named Emma. Alice just wants to be left alone “to sleep and dream.” One could read this as a tale of someone suffering from Alzheimer’s, or one could take it as an even sadder tale of an old and lonely Alice, desperately wanting to recapture her time in Wonderland.