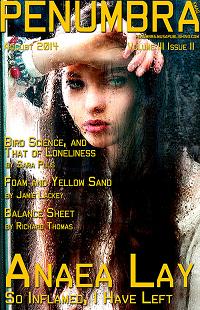 “So Inflamed, I Have Left” by Anaea Lay
“Bird Science, and That of Loneliness” by Sara Puls
“Foam and Yellow Sand” by Jamie Lackey
“Balance Sheet” by Richard Thomas

This issue’s theme is: Pain.

The sex of Anaea Lay’s main character in “So Inflamed, I Have Left” is never revealed. However, the character has a distinctly female ambience, so will be referred to in this review using that pronoun. She is someone who cooks and eats dinner alone because the other humans in the household, the ones who should care, prefer to leave their home rather than be in her company. Emotionally devastated by their active apathy toward her, she would rather be dead—figuratively if not literally. Because of the pain of her loneliness, she has volunteered to be sacrificed to the local dragon—an act of appeasement that must occur every seven years. Though short, this is an angst-filled and too familiar tale of emotional abuse and how it can affect someone. Although the dragon makes this speculative, the story could be told by anyone leaving something painful behind in favor of something that might offer the peace of a noble death.

In “Bird Science, and That of Loneliness” by Sara Puls, Taia is an ornithologist who has been sent to another planet to study the natives. From previously gathered information, it is known that the Avialae Seirenes communicate using sounds, and that those sounds, called siren songs, are lethal to humans. When Taia encounters a lone and injured siren, she is tempted to remove the deafening aural implants that keep her alive. Instead she helps the native. Gradually, they develop a brief relationship that staves off the loneliness that set in once Taia realized that something must have happened to destroy her homeworld—she’s received no communications in a long time. This means there will be no peers, no friends, nobody to come after, or rescue her. Through various nonverbal communication methods, Taia conveys a plan that will alleviate not only her suffering, but also that of her new siren friend. It was difficult to ignore the obvious here. Sending either a pair of scientists or a deaf one would have made this entire scenario moot.

Jamie Lackey takes on pain from another angle in “Foam and Yellow Sand.” Ellen washes up on the beach and interrupts her husband’s wedding to Bianca. It turns out Ellen was believed lost at sea several years prior. When her mother-in-law, Grace, begins manipulating Ellen in an effort to drive Bianca away, Ellen is at first confused. By the time Ellen realizes the truth of her situation and makes a decision about how to handle it, she must act with haste before she misses her opportunity. This is an easy read that addresses the pain of love.

Mr. Jones, the protagonist in “Balance Sheet” by Richard Thomas, loves his daughter. So when Agent Allen and the men in gray jumpsuits arrive at his house with his daughter in tow, this retired CPA gives up the tip of his forefinger as immediate justice for her shoplifting. Years later, her spying, treason, and grand larceny cost her father his hand and eyes. This is a man whose love for his child is as painful as her disregard for him. The story here touches on both emotional and physical pain. It is suitably painful in its predictability.