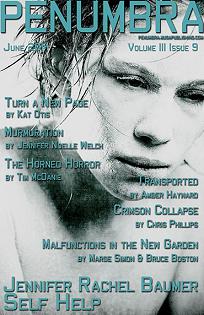 This month’s theme is “Isolation.”

“Turn a New Page” by Kat Otis clearly points to our choices as to what can lead us into, or out of, isolation. Otis uses virtual reality as a clever take on the ‘choose your own adventure’ story type. The protagonist, Alicia, must make choices regarding relationships: whether to take the safe route (and remain isolated) or take chances (and perhaps become romantically involved – or risk being hurt). It’s a very short story, but tight, and well-written.

“Murmuration” by Jennifer Noelle Welch deals with the isolation that often comes after the death of a spouse. Clara, a bird watcher, has lost her husband, and has not left her house since the funeral. And birds have begun to kill themselves by crashing into her window, quite frequently. Clara’s fear and anxiety are quite palpably described in this moody tale. But, despite the dark tone, it is ultimately quite uplifting. I was quite surprised, and touched, by the ending.

“Self Help” by Jennifer Rachel Baumer only tangentially touches on isolation, in that it is about a woman who demonstrates typical obsessive-compulsive behavior, which can be isolating. But she does it to keep her husband safe. Sarah keeps a journal of her actions that she performs to keep Jack safe throughout the day, and when he accidentally sees it, he convinces her to seek psychiatric help. She agrees to do so, but the consequences are not what either of them expected. I found this story light and amusing.

“Crimson Collapse” by Chris Phillips is another story that is a different take on ‘isolation’. Some sort of alien red spores have begun to spread over the moon and onto Earth, and people are trying to protect their homes by using plastic wrap to keep them out. In the midst of this, a couple is arguing about their future. For some reason, this one didn’t work for me. I could see where it would ring true for others, but I just didn’t care about them.

“Malfunctions in the New Garden” by Marge Simon and Bruce Boston is a very creepy, very short story that brings to mind Lord of the Flies. In this case, the isolation is that of ova being kept in stasis during deep space flight, until planet-fall. Once they land, the excitement begins.

“Transported” by Amber Hayward is a fun little story about transportation technology. The narrator has been alone for three years, perfecting the technology, testing it on her cat and herself. It’s another very short story, and one that left me smiling.

“The Horned Horror” by Tim McDaniel addresses the kind of isolation where you are alone even in a crowd. Teenagers are often the worst at feeling this kind of isolation, and this story deals with this, but in a most humorous way. Jeff is a typical teenage boy, until a unicorn shows up and ruins his life. To explain more would spoil the story – literally. I imagine McDaniel had a lot of fun writing this one.