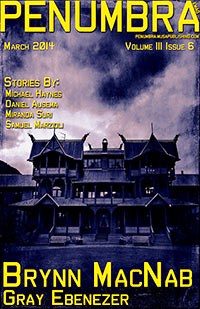 “The Firefly Girl” by Miranda Suri takes place in modern-day Venice, where Damien and our unnamed narrator are celebrating Damien’s bachelor party, with nights of debauchery and revelry. They arrive at a particular villa, where the ‘firefly girl’ holds court. No one really knows who or what she is, but seeing her will cost $5,000. Damien can’t wait to ‘bang her’. Our narrator is somewhat more reluctant. Suffice it to say that neither really knows what he is getting involved in. Suri does an excellent job setting the tone for the piece, and giving us insight into both Damien and the narrator without the need for much verbosity. It’s a tightly written story, with a suitably creepy ending.

“Death Warrant” by Michael Haynes is a nifty little story about a writer – a propagandist – who is penning his ultimate bit of prose. It’s a very short story, and not much more can be revealed without spoiling the delight of it. Suffice it to say that it is very well written and I enjoyed it a great deal.

“Gray Ebenezer” by Brynn McNab is the featured story of this issue, and it deserves this honor. In this story we follow the life of Chelsea, whom we first meet when she is just out of high school and working as a waitress in a diner. On this shift, a neatly dressed older gentleman has made a bit of a mess, which she has to help clean up. Through the following years, the same gray gentleman keeps appearing, and people keep disappearing, and Chelsea has to help him, repeatedly. The denouement of the story was extremely satisfying, in a horrific kind of way. It’s definitely a good horror story, in every sense of the word.

“The Skin Stealer” by Daniel Ausema imagines the summer of 1816 at the Villa Diodati with a little twist on what we know, historically. As Byron, Shelley, et al, are composing their monster stories upstairs, there is a true monster downstairs, on the kitchen staff. Ausema creates an interesting type of monster, but we don’t get any insight into why this monster must do what it does. This is the only drawback, however, so this is still a pretty darned good monster story.

“Servant of the Aswang” by Samuel Marzioli is set in modern day Manila. An aswang is a monster from Filipino folklore, similar to a vampire in its need to kill humans to stay alive. The method of killing is different, and this particular aswang has devised a way to even hide the deaths. But she is old and needs someone to help her lure victims, so she has ‘recruited’ an accomplice who is a young (former) university student. This servant knows she is luring people to their deaths, but she fears the consequences of refusing, so she cooperates. This is her story and I really liked it. I thought the aswang was an interesting monster, and the young woman’s dilemma was very believable and very moving.