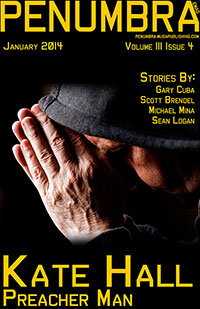 The January issue of Penumbra deals with the timely theme of winter.

In “Granny’s Time” by Gary Cuba, Tulok struggles to feed his family, and decides that he can no longer support his aged Granny. He takes her out onto the ice and leaves her, but his luck doesn’t turn around and he and his family attempt to walk to the nearest settlement. The family is dying when Granny returns to give them the supplies they need to make it. The story is preachy and the writing is awkward in places. It is unclear if Granny returns as a ghost—if so, that’s the only speculative element in the story.

Scott Brendel’s “In the Gray Light of Dawn” is another one with a very slight speculative element. Ralph spends a normal morning before killing himself to be with his dead wife, who spent the morning with him either as a memory or as a ghost.

In “Preacher Man,” this month’s featured story, Kate Hall uses evocative language to capture a feeling of madness. Preacher Man lives on the streets and tries to ignore the devil who whispers in his ear. Then, as snow begins to fall, he realizes that winter is just as bad, if not worse. The unreliable narrator undermined any hint of a speculative element in the story, and the ending fell flat.

“Dog Days” by Michael Mina opens with a woman fleeing two men. She has no memory, and it’s not clear why the men are chasing her. She seeks shelter with an old man who kills them and drugs her. The story relies too heavily on a twist ending that reveals the woman’s identity, and the dialog is awkward.

In “Contrafactum” by Sean Logan, Gerald hosts a classical music radio program, and he’s approached by a stranger who offers to let him listen to a rare recording. One of Gerald’s friends tells him the dark history behind the music, but when he decides to pass, he’s kidnapped and forced to listen anyway. The story goes for creeping horror, but relies on too much exposition, and the pacing suffers.