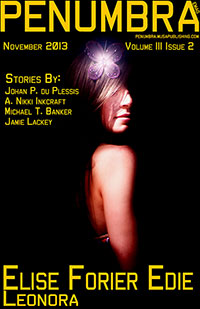 This issue’s theme is “Gaslight Fantasy.”

“Carie’s Way” by Johan P. du Plessis is a very short story about a young woman, Carie, who must make a decision on how best to deal with a (possible) supernatural threat to her world and her family. The brevity of the story, while serving the purpose of keeping the mystery about the threat, is a bit of a handicap in character and plot development.

“Heaven’s Shutting Gate” by A. Nikki Inkcraft is a riff on “If you could go back and kill Hitler before he comes to power, would you?” In this case, the protagonist is killing serial killers before they start. This is straight-forward when one knows the killer (Bundy, Manson), but what does one do with someone like Jack the Ripper, whose identity is unknown? And what happens when killing the killers becomes a little too exciting? It makes an interesting idea for a story, indeed.

The feature story for this issue is “Leonora” by Elise Forier Edie, and with good reason, as this is easily the best of the bunch. In this story, we meet an unnamed ‘person’ on Guy Fawkes night, who is getting ready for a night of carousing. However, this is no human, and his plans are for more than the usual hijinks of the holiday. What he didn’t bargain for was meeting Leonora. How she impacts his ‘life’ is really quite touching. This story seemed to really invoke the ‘gaslight’ feeling, and was very well crafted.

“Pictures in Coal” by Michael T. Banker is a good little story, if somewhat predictable. A so-called ‘enforcer’ in a coal-town is ordered by the Coal Boss to put an end to the street art created by a young urchin. How the enforcer’s life is changed by the art, and by the artist, is the entire story arc. It is deftly handled, even if it is a bit short on character development.

“The Iron Tang of Blood” by Jamie Lackey is another story that left me wanting a bit more in the telling. A dying young woman conjures a unicorn to heal her. The unicorn refuses, because he is being kept captive, leading to the inevitable. And that’s pretty much all that happens. Some insight into the young lady’s thoughts might have added to the intended punch of the ending.