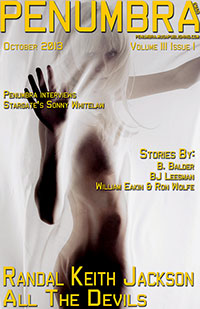 “The Doll Is Dead” by Bo Balder
“All The Devils” by Randal Keith Jackson
“Nietzsche’s Children” by William R. Eakin and Ron Wolfe
“The Little Man Who Wasn’t There” by B. J. Leesman

This issue is dedicated to Alfred Hitchcock, though most of the stories don’t feel Hitchcockian and, sadly, there are no MacGuffins.

“The Doll Is Dead” by Bo Balder is a flash fiction tale about a woman with a host of mental disorders who is obsessed with a New York City street performer. Unhinged by his sudden disappearance, she goes on a personal quest to discover what happened to The Doll and the true nature of his “mission.” Strong characterization, but the ending was a bit of a head scratcher.

Randal Keith Jackson‘s “All the Devils” is a classic revenge tale. A doctor known for his groundbreaking work in pain management invites a priest to his lavish home for dinner. After nearly burning the father to death with a spicy bowl of chutney, the good doctor says he’s discovered a portal to Hell. He then reveals their dark connection and the real purpose of their get-together. It seems more like a story you’d find in the old EC comic Tales From the Crypt than an Alfred Hitchcock movie. Nonetheless, it’s well-told and effective.

In “Nietzsche’s Children” by William R. Eakin and Ron Wolfe, a man receives a mysterious manuscript allegedly written by Friedrich Nietzsche. Once he begins to translate the book from the German, he gets caught up in a revenge plot and discovers the extraordinary implications of the writings. The only story of the issue with mystery worthy enough of a Hitchcockian tale. The climactic revelation is convoluted, though, as it tosses together incest, post-human genetic science, Nazis, and Nietzsche. While it’s quite a lot to grasp in a 10-page story, there’s enough suspense to carry it through.

“The Little Man Who Wasn’t There” by B. J. Leesman needs a big suspension of disbelief. Alfred Hitchcock transports a woman from the modern day to 1960 to serve as Janet Leigh’s body double in Psycho. As you’d expect, things don’t go well for her during the shower scene. The story might have worked if it was clear why Hitch was traveling through time or how. But as it is, the reader is supposed to accept the outlandish premise without explanation.