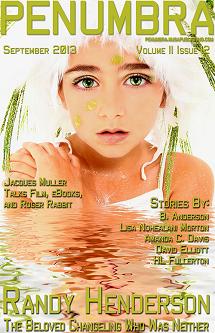 “Beware Fairy Books” by Lisa Nohealani Morton
“Things I Wish I’d Known Before Drinking the Faerie Wine” by Amanda C. Davis
“Queen Mab Goes Forth to Conquer” by Brenda Anderson
“Virtual Joy” by David Elliott
“The Beloved Changeling Who Was Neither” by Randy Henderson
“A Ferry Spell in Port Moon C” by H.L. Fullerton

This issue’s theme is “the Fae.”

Lisa Nohealani Morton leads off with the flash fiction story, “Beware Fairy Books.” There are warnings, of course, about what one should or should not do in fairy land. Readers in this genre are likely familiar with many of those cautions. This fast, quaint, and memorable read reminds us not to be too smug in our knowledge or our preparations for any fantasy endeavor.

The title of Amanda C. Davis’s “Things I Wish I’d Known Before Drinking the Faerie Wine,” sums up the story. Three friends reminisce on the turns their lives have taken since they imbibed. This is another fun, quick read.

Brenda Anderson shows us another side of Her Highness in “Queen Mab Goes Forth to Conquer.” Here, Mab is a tech savvy consumer with the means to request and receive custom made items. Her desire of the moment is a custom-built carriage. The story relates what she does once she gets it.

The tech savvy fantasy creature in “Virtual Joy” by David Elliott is a banshee named Joy who discovers Facebook. This story, with its blatant use of the word f***, and its allusion to how easily young men are led by their genitals, is clearly meant for audiences that aren’t squeamish about such things. There is no sex here, gratuitous or otherwise. However, the ending, with its change of voice and tone, was unsatisfying.

“The Beloved Changeling Who Was Neither” by Randy Henderson is the tragic tale of what happens when Connor is born with “the back of a turtle, hands like claws, and the head of a troll, each cast in the pink flesh of a newborn man.” His mother, believing that the fae have played a trick on her, sets out to exchange the child for the one she believes to be her own. What follows is in keeping with fae mythology.

H.L. Fullerton’s “A Ferry Spell in Port Moon C” departs from the classic mythos and boldly goes where few fae have gone before. When Captain Deluxury Jimes finds a corpse in her locker after a string of bad luck, it sets off events that end up with her imprisoned with a fae who allows her to call it Fear, and tells her that she will thank him later. It doesn’t make sense until it does. That’s the kind of story this is.