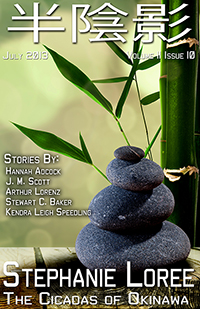 “The Men Who Loved The Sun” by Hannah Adcock
“The Spirit” by J.M. Scott
“The Fire Wish” by Arthur Lorenz
“The Cicadas of Okinawa” by Stephanie M. Loree
“Raising Words” by Stewart C. Baker
“They Shall Know Us At the End” by Kendra Leigh Speedling

This issue’s theme is Japanese mythology, with stories ranging from the hopeful to the melancholy. Some of the stories I enjoyed, while others fell a bit flat.

“The Men Who Loved The Sun,” by Hannah Adcock, is told by Issun, a tiny Japanese spirit who has to go on a mission to retrieve the goddess of the sun. The sun’s brother, the god of storms, chased her into hiding, and Issun and his friends know that they have to coax her out or the world will die.

Issun has a narrative voice that’s modern and in places quite funny, but the story itself felt a little shallow to me. The quirks of the prose didn’t quite make the story feel less generic.

J. M. Scott‘s “The Spirit” is narrated by Jim, a man reluctantly accompanying a co-worker to a Japanese festival. Jim’s divorce is nearly final and his kids are ill, and he goes to the festival without much in the way of expectations. He finds it completely engrossing, watching a sword being forged and listening to the spiritual process involved. At the end, the maker presents Jim with another sword, one he says will give him a spirit of his own. The story ends on a much more hopeful note than it began.

Though the story was short, I found Jim an engaging character. The description of the festival and the forging of the sword was quite well-done, but the ending, while happy, was also a tad predictable.

In “The Fire Wish,” by Arthur Lorenz, a widowed father is trying to rebuild his life after a tsunami. He works in a nuclear power plant, and has spent his time since the tsunami trying to repair the damage to it, afraid of what will happen to his daughter and all of Japan if he fails. The Shinto fire-god, Kagu-tsuchi, contacts him after a co-worker is killed in front of him, and grants him one wish. He wishes that the reactors could be brought under control, and Kagu-tsuchi demands a pure soul in exchange.

I really liked this one. I thought the narration was perfect for the subject, melancholy and subdued, and in one place fittingly gruesome. The protagonist’s fear and desperation comes across very well, and the entire story has an air of claustrophobia about it.

“The Cicadas of Okinawa,” by Stephanie M. Loree, is set in 1945. This one needs a trigger-warning, since it opens with a rape scene, though not a graphic one. The protagonist is a girl who is accidentally murdered by one of the four soldiers who dragged her from her home. A cicada takes in her spirit, and she shelters within it until she metamorphoses into something neither cicada nor human, a creature like the one in stories her grandfather used to tell. She gets her revenge on the soldiers, and witnesses the atomic bombs falling on Hiroshima and Nagasaki.

This story was unsettling, but I enjoyed it. I thought the atmosphere was well-created, inescapable war and heat and death juxtaposed with beautiful descriptions of the cicadas.

In Stewart C. Baker‘s “Raising Words,” a legendary warrior dies in battle and is mourned by everyone but one of his daughters, who is the only one to remember just how much had changed him. When she was a child, he was kind and thoughtful, but when he returned after many battles he was a harsh, arrogant man. He orders her to marry her cousin, to give him a better chance of someday ruling Japan. She, grieving for who her father had once been, runs away to the forest and there meets gods her father had offended. He dies while she is away, and she promises to tell stories of the man he was, not the man he became.

I found this one very sad, and not because the father died. The daughter alone realized how much he had changed, was the only one who valued the kind human over the warrior, would-be god. As she says, her actual father died long ago.

“They Shall Know Us At the End,” by Kendra Leigh Speedling, is a story of divine revenge. A spirit takes the form of a beautiful woman who falls in love with a human. She stays with him despite her family’s attempts to draw her away, until he grows tired of her and transfers his affection to a human woman. The spirit, still in human form, kills herself in shame, leaving her sister to destroy the man who had wronged her.

It’s another heartbreaking story, with characters more three-dimensional than they at first appear.