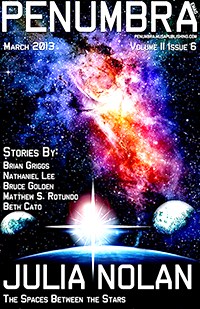 “Wendell, Custodian of the Galaxy” by Brian Griggs
“The Spaces Between The Stars” by Julia Nolan
“Playing to Win” by Nathanial Lee
“Light Chimes” by Matthew S. Rotundo

An issue devoted to space opera, with a touch of sadness to each story.

Brian Griggs‘ “Wendell, Custodian of the Galaxy” is narrated by a man who went to space hoping to see the stars, but thanks to an unfortunate incident with a commanding officer’s pet, is stuck on sanitation duty. He becomes convinced that the ship’s trash has gained sentience and is trying to kill everyone, but things may not be what they seem. It’s at once funny and a little heartbreaking and quite well-done.

“The Spaces Between The Stars”, by Julia Nolen, is the story of Petra, a mercenary technician hired to create a neural link between a client’s ship and the young girl who is meant to pilot it. The child comes from a race of beings who control starship travel, bred in secret so the rest of the race won’t know or be able to control her. Petra, feeling sorry for the girl, wants to help her escape, but things don’t go as planned. While well-written, I found the ending a little predictable.

“Playing to Win”, by Nathanial Lee, is narrated by a man named Kyr (so named for Keir Dullea, the actor who played Dave in 2001). He’s a man trapped on an alien world, trying to survive while playing games of chess with a creature he calls Hal. The game is a metaphor for a larger, potentially fatal game between the two, and it’s implied this Hal will pursue him no matter where he goes. A nice riff on the confrontation between Dave and Hal from the aforesaid 2001.

Matthew S. Rotundo‘s “Light Chimes” tells of Rosa and Sam, two researchers who are part of a team sent to study a highly radioactive planet. One is badly injured in an accident, and their ship doesn’t have enough power to send a distress call. Rosa, not willing to allow Sam to die, wants to mine the outside rocks to boost their power enough to make radio contact. Sam insists that she shouldn’t, that the photoliphs, the ‘light chimes’, are sentient beings who shouldn’t be harmed. Rosa disagrees, leaving the ship to collect a few pieces, but finds herself swayed by Sam’s conviction. Though a very short story, I found it intensely sad, especially since the outside environment was grieving with Rosa. 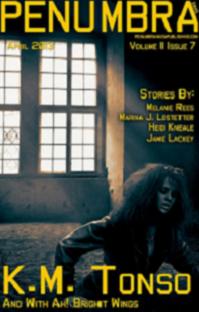 “Two to The Power of One” by Melanie Rees
“And With Ah! Bright Wings! (For the twenty. For all)” by KM Tonso
“Ol’ Soapy’s Revenge” by Marina Lostetter
“The Skeleton In Her Closet” by Heidi Kneale
Reviewed by Cyd Athens

The general theme this issue is “Lost.”

Like all good villains, The Keepers in Jamie Lackey’s “Losing Home” are the heroes of their own stories. They are liberating “infidels” by gifting them hideous, heart-eating worms that must enter the host body through the big toe of the left foot. Jen, the protagonist who has lost just about everyone she cares about to these liberators, decides to take her revenge. Though the basic plot is familiar, the tale has a few surprises.

Kenneth, the main character in Melanie Rees’s dark tale, “Two to the Power of One,” is an antihero and a mathematical geek. The story’s title is based on the mathematical fact that any number raised to the power of “one” equals itself. When Kenneth is stuck on a dilapidated space shuttle with Jackson and Anya, they must find a way to survive. The end of the story nicely ties up all the loose ends from the beginning. Count on it.

At first glance, KM Tonso’s “And With Ah! Bright Wings! (For the twenty. For all)” seems to be about Paul, a man who has seen too many children die, and his response to the mind-numbing tragedy of so many lost souls. By the end of the story, it’s clear that the tale is as much about what the ghosts of these children find when they come to his house and the long-lasting legacy that creates. A touching story about creating the right place in the right time to do the right thing.

“Ol’ Soapy’s Revenge” by Marina Lostetter is a time travel story that shows what happens when humans can’t agree about what to do with alien technology. The shortest story in this month’s issue, it is also the funniest.

Janet, the hero of “The Skeleton In Her Closet” by Heidi Kneale, becomes the unexpected beneficiary of a deceased librarian friend’s clothes. The surprising outfits in the “ginormous” closet make Janet reevaluate her own life and realize that she’s done nothing noteworthy with it. She becomes driven with a need to leave something memorable behind when she dies. Though the speculative fiction bona fides are questionable here, it is, nonetheless, a fun read.