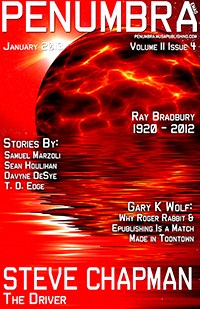 “The Slide” by Davyne DeSye
“A House in the Woods” by Samuel Marzioli
“The Driver” by S.S. Chapman
“Livestock” by Sean Houlihan
“Guy” by T.D. Edge

This issue of Penumbra is published in honor of Ray Bradbury (1920-2012) with a collection of excellent stories, all written in homage to Bradbury.

Davyne Desye’s “The Slide” is a heart-warming child’s tale about “a boy named Michael, who lived in the house of his wishes and dreams.” Michael got whatever he wished for, but he couldn’t command anyone else’s behavior or cause harm. He found it odd that his parents silently endured the long stairways and the regular changes he made to the house, but then they obviously didn’t have his powers. As he grew, his wishes changed and so did his house and toys. Eventually, he met a wonderful woman and fell in love, learning “that caring for her was even more gratifying than wishing for himself.” Although their eldest child had his powers to wish things into being and his knees protested the long stairways his daughter created in their home, he refused to undo her wishes. It was the time for his children’s dreams to become reality.

A beautiful story about the purity of a child’s worldview in spite of the limits of their understanding, limits that evolve into wisdom as we mature into adults. A definite read.

“A House in the Woods,” by Samuel Marzioli, tells of a cynical man, Ray, who buys an old house on a hillside overlooking the ocean as a retirement home. But it’s in horrible shape, so he decides to raze it and start over. But the house has its own ideas and whispers discontent, an unease that makes Ray feel like he’s being watched. After the demolition is complete, Ray stays behind recalling stories of haunted houses. Then the rubble begins to move, shaking, shifting, pieces lifting and falling as if it was breathing. In reply to Ray’s horrified cry, the house breathed its last death rattle and fell silent.

Do we truly know the full extent of what constitutes life, both in this world and any next that there may be? For the first time in Ray’s life, he wondered if he actually had a soul, for if a house could have one, might not he? A brilliant story and a must read.

S.S. Chapman’s “The Driver” is a classic ghost story with an intriguing twist. Kyle is on break from college, driving anywhere the road leads. One late night he picks up a gorgeous hitchhiker, Heather, and realizes that she’s different, right before he crashes his Trans-Am. The local townsfolk confirm his suspicions—Heather is their vanishing hitchhiker. But he believes he can help her and really wants to find her. Rose, Heather’s older sister, has been banishing ghosts ever since her sister’s spirit had returned. She sees Kyle as a possible way to get close enough to Heather to banish her too. But when the three of them finally meet, they all learn that Kyle and his Trans-Am are much more than everyone imagined. Sometimes only the dead can help the dead. An excellent story with mystery, ghosts and a love story.

“Livestock,” by Sean Houlihan, could make the case for exterminating every bovine there is. They came, not by ship or invasion, but by stealth, using nano-machines to alter the genetics of the common cow, transforming grass-eaters into predators. Now humans are the livestock–pacified, herded, bred and slaughtered. And the remaining human fugitives are hunted like wild game, captured and eaten bloody, while still alive.

Chilling, even a bit revolting, but genius nonetheless. A must read.

T.D. Edge’s “Guy” is a ghost story based upon actual historical events. Guy Fawkes was a member of a group of provincial English Catholics who planned the failed Gunpowder Plot of 1605 when they tried to blow up the English Houses of Parliament. His failure to bring down the government is celebrated every year on Guy Fawkes Day when both he and the Parliament are burned in effigy.

Dan is excited about the Guy Fawkes fair that starts tomorrow with its lights, food and rides. But this year is different: a gigantic “Guy” has been constructed that will be burned with the mock Houses of Parliament. Dan lives in Lancaster, and the fair this year is being held near Pendle Hill, where twelve alleged witches were hanged seven years after the failed Gunpowder Plot. When he goes to see the huge “Guy,” he hears the ghost of Guy begging that he not be burned this year so that he can finally be at peace. Of course, no one else believes Dan. Yet, history offers Dan a solution—the witches of Pendle Hill. Their power of pain still lurks in the darkness of the hill, magic that can only be released if they are invited to use it. And Dan invites them to save Guy.

An exceptional story. My choice for best of this superb issue.

Louis West. With a background in sub-atomic physics, astronomy, biophysics, medical genetics and international finance, Louis is particularly fond of hard SF. He critiques a broad variety of unpublished works and volunteers at various New England-based SF&F conferences. His own SF writing explores the personal, social and cultural impacts of evolving nano-tech.