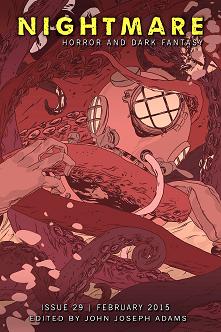 “Descent” by Carmen Maria Machado
“The Garden” by Karen Munro

The protagonist goes to a meeting of her women’s book discussion group one cold October evening. The hostess, Luna, has had a bad week. Due to a shooting at another school, she now has two of the survivors in the class she teaches at a private girls’ school. Salma and Nicki both have PTSD, to say the very least, but there’s also a supernatural element present. Luna tells the group what Salma told her about what Salma saw while hiding from the shooter. As if all that isn’t horrifying enough, the protagonist gets hit with the twist ending.

If it sounds like I had trouble following the main thread of the story, that’s because I did. The protagonist has no name, no backstory, no purpose other than to witness Luna telling her story which sets up the twist ending. The pacing is uneven. It takes a while to find out what this story is really about due to too many details about the weather, Luna’s living room, and the group members who are little more than names and character tags. The scary parts are indeed scary. Unfortunately, there are too many and they don’t add up to a whole effect. Nicki sees a student in the classroom that no one else can see, which freaks Salma out and leads to her telling Luna her story. That’s all Nicki does. Her presence in the story stops after that scene. If she’s seeing dead people, then she should suffer the consequence which Salma explains to Luna. Loose ends like that weaken what could have been a good story in the tradition of the audience gathered round the fire while the hostess tells the tale.

“The Garden” by Karen Munro

Darlene is an Australian in Korea to study the language while working as an English teacher. She makes friends with Sook-Joo, a local free spirit who lives for her next drug fix. Sook-Joo does not talk about her past. As the story progresses, there are hints and implications that she did something terrible and now can’t go home again. One night Sook-Joo’s latest fix is pieces of what Darlene thinks are mushrooms. Not Darlene’s favorite fix because they make her vomit. That’s a blessing in disguise thanks to what those mushrooms really do.

There is a definite nightmarish quality to Sook-Joo’s life even before Darlene discovers what and where “the garden” is. The story’s imagery is full of sensory details that make it hard to tell which events are real and which are hallucinations. I found the ending to be vague and confusing, but that’s consistent with Sook-Joo’s refusal to give Darlene a straight answer about anything.