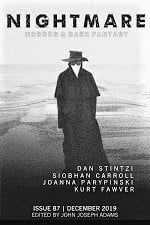 “Methods of Ascension” by Dan Stintzi

“Methods of Ascension,” by Dan Stintzi, begins with the main character explaining that it’s not unusual for his brother, Robert, to send to send him strange videos he’s found online, however this practice stopped for a while – until he receives a link to a strange page all about the titular methods of ascension. So, he goes to visit his brother in their late parents’ cabin in the northwoods, and they work on rebuilding the shed his brother accidentally burned down. Things, naturally, get weird very quickly. This is a story that’s perfect for Nightmare in that it literally resembles a nightmare: perfectly sensical at the beginning, gradually sinking into a mass of increasingly horrific images. Sadly, I rather lost the sense of dread two-thirds of the way through, and felt that the ending didn’t quite hit the mark – but perhaps that’s just me. Give it a try and see what you think.

“Dead Worms, Dangling,” by Joanna Parypinski, begins with two teenagers named Milo and Buck fishing at the edge of a river, trading banter and, shortly, bets over the size of their respective catches. There’s more under the surface, both literally and figuratively, as we discover that Buck’s face is badly bruised. This is a great piece of fiction: the dialogue and the relationship between the two boys feels very natural, and the layers are revealed gradually, at just the right pace so that we, the reader, get there perhaps a line or two before the characters, and thus experience that delicious sense of “oh no, no, no, no” that’s inspired by the best horror. Very nicely done.

Kat Day is an associate editor at pseudopod.org, writes a mixture of stuff and can be found generally hanging around on social media. You can follow her on Twitter @chronicleflask.