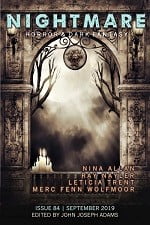 “Sweet Dreams Are Made of You” by Merc Fenn Wolfmoor

“Beyond the High Alter” by Ray Nayler

“Sweet Dreams Are Made of You” by Merc Fenn Wolfmoor is a story with an intriguing premise but poor execution. It follows a fully-immersive online/dream game called Vore which features a woman who eats the player. Ostensibly, the player gets a lot of satisfaction out of being eaten.

The problem with the story is the way it’s told. Mostly via wiki entries in a matter-of-fact sort-of journalistic way. This prevents the reader from being fully drawn into the horror of the story.

This would possibly be an effective way of telling a science-fiction story, but since horror relies on bringing the audience in and getting them to, in a sense, live the horror, the structure actually puts too much distance between the reader and the experience.

It is an interesting story that is fun to think about but ultimately feels sterile in the reading.

“Beyond the High Alter” by Ray Nayler, on the other hand, does a good job bringing the reader into a story set in Afghanistan. The premise is a set of letters purchased in a bazaar outside an air force base in 2006, though the story contained in the letters is clearly older than the present.

It follows the expedition of two men in the mountains and the strange altar their local guides bring them to. I don’t want to spoil the story by telling you about the altar and the further mysteries it unveils. The story, overall, is engaging and interesting, but it fails by ending with too many mysteries left behind and too many questions unanswered.

It also, unfortunately, doesn’t feel much like a horror story. I kept waiting for a horrible twist, but instead was left with a fanciful folk tale that feels unfinished.