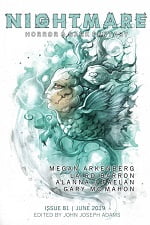 “The Night Princes” by Megan Arkenberg

“The Night Princes” by Megan Arkenberg

This evokes a mood of oppression and fear but has the dull aspect of a dark fairy tale rather than the sharpness of horror. Despite that, it’s more akin to a strain of horror than dark fantasy in that there’s nothing fantastic about it at all—just a dominant prosaic thread interlaced with a subordinate thread of metafiction. The prosaic thread is vague, the metafiction is unconvincing, and neither fully coheres or—oddly, for a story about death—concludes.

You are the (apparently female) lover of a woman who has written you a letter. In this letter, she tells you some things you surely already know but some extremely important and probably shocking things you don’t. It details her unhappy relationship with a man and the misery of her raising a newborn alone, set against the backdrop of the end of the world.

There is a powerful, disturbing story in here but it’s not without glitches (for example, in a story in which the fantastic may be present, it’s important to make clear that a silently burning woman is mundane if she’s intended that way) but the thing which most harms the story is that it’s written in at least three styles, two of which veer outside the ordinary. One produces ornate 19th century lines like

It had been three weeks and Ray still hadn’t come back. He was never an audacious man. His inflexibility, his aversion to risk or conflict of any sort, was the raw spot at the center of our relationship.

I imagine most other people would have kept Ray at arm’s length, but I threw all of myself into the endeavor of us.

while others are plain 21st century:

Nothing I did worked. Nothing in the books, on the web, on the mommy vlogs.

I shut the nursery door, curled up on the sectional with my laptop, and put on my noise-cancelling headphones.

For more extreme examples, the 19th century may be responsible for lines like

Down on the street, a mandorla of orange flame parted the blue twilight.

while the 21st may claim

I grabbed him by the ankles, removed the diaper, and placed it in the trash. His entire lower body was covered in shit.

Another problem involves flaws triggered by the narrative device (a frequent problem in “Lightmare” where narrative strategies which have shown enduring power are rarely used). The story doesn’t start until the second paragraph and we get lines like, “Bring Ray and the baby, you said.” Did I? I had no idea!

These issues obscure what might have been a powerful tale of a mother’s misery, a world’s madness, and fleets of ships passing in the long night.