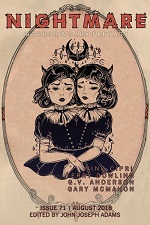 Nino Cipri’s “Dead Air” deals with the intensifying relationship between two young women, Nita and Maddie, who first meet in a Chicago bar. Nita, a girl of the suburbs searching for glory in the fine arts, records sexual attitudes by interviewing the people with whom she has had intimate relations. With Maddie, this voice diary stops being casual and turns into self revelatory expositions.

Nita, smitten with Maddie, trolls the social platforms to get information about her and finds that records of Maddie go back only five years. She questions Maddie about her hometown in Washington State but the name never gets recorded and she cannot locate it on a map. She finds the bare details of a five-year old car accident involving Maddie and another girl but in this age of visual records she cannot locate photos, in a time when processes are carefully specified she cannot find reports of follow-up action, and in a world where everyone is digitally connected she has no information about the other girl. Nita, her curiosity fully roused, decides to spend Christmas with Maddie in her lost town and thus sets in motion Maddie’s surrender.

This spirited story, with a charming female cast, spins the tale of a lost town that holds on to its people with a suffocating grip. The close growing trees of the unnamed town are ominous, the strange powers that lurk just on the edges of our sane world are thrilling, the story of Maddie has a satisfying fatalism, but none of these separately or together make us catch our breath in bone-chilling fear.

In G.V. Anderson’s “Crook’s Landing, By Scaffold” we follow the hero, a boy in his late teens, after he has been hanged for committing a serious (but unclear) crime and is sent into the afterlife—a circle of hell, called Crook’s Landing, reserved for con-artists, thieves and other riff-raff. This boy embarks on a search for his young brother Charlie who had been hanged a couple days before him. Our hero feels very strongly that it is his duty to find and mind his young brother.

We journey through a carefully evoked world where the crooks continue with their pre-death pastimes of fixing fights, running gambling dens and other insalubrious activities. The signal difference is that in life they chose these professions to be able to make a living; in death they are simply repeating a pattern out of habit. Our hero breaks the system by the simple act of remembering his brother. His final sacrifice is dictated by his memory which also reveals his reward to him.

G.V. Anderson presents a simple story of teenage crime and unplanned violence resulting in permanent harm. There is suspense but it is not bloodcurdling. The final sacrifice has a high moral tone but again does not send chills down one’s spine.