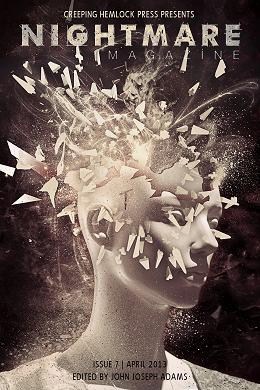 Hmm. I’m not sure I fully understood Marc Laidlaw‘s “Bonfires.” It begins with people lighting bonfires in the dark of night on an ocean beach. A man and woman set one pyre afire, then make love until boats of what are presumably dead people arrive, guided in by the light of the fires, and who are then taken away in trucks up by the road. We learn that those lighting the fires have also arrived by these boats and are also presumably dead, now having taken the job of shepherding the newcomers ashore. Are the dead (some appearing scared or confused) those having died at sea by various mishaps? Where do the trucks take them, and for what purpose? What’s going on here? Nothing is explained, and it left me scratching my head; a vignette, a snapshot without a hint of a storyline or clearly made point is all I could glean from it. Perhaps this is a macabre version of John Varley’s “Air Raid,” but with the passengers already dead? Hmm.

“Gravitas” by Weston Ochse, on the other hand, enjoys a definite beginning, middle, and end. Set in the Black Hills of South Dakota, this contemporary story relies heavily on Native American folklore and how one blonde-haired man, Dave, from back east becomes attuned closely enough with the land and spirits that they (unbeknownst to him) carry out his evil thoughts via multiple murders over a span of years.

We first see Dave living a solitary existence in an RV on what will soon become the state’s land as part of Custer Park after his aunt passes away. He does nothing but guzzle case after case of expensive wine, smashing the bottles outside the RV in what is now his glittering garden of broken glass. Ochse then expertly drops in background on Dave, his relationships with his father, mother, the aunt and uncle who raised him, and his dead wife, for whom he mourns and is the primary reason for his drinking. We are given some history of the Native American land and its relationship to the Lakota Sioux, which are essential to an understanding of the story’s thematic resolution (which I shan’t spoil here). Enough to impart that it involves the local sheriff with whom Dave grew up, and who the author has curiously chosen to name Lamont Cranston of all people, the name being that of the legendary fictional detective known as the Shadow. While I wrote “curiously,” the author of course chose the name purposely, the meaning becoming clear toward the very close of the story, for what frees Dave from what he has become involves a trademark of the Shadow—for the Shadow’s victims never see (or in this case, hear) him coming. There is also another reason for naming the sheriff after the Shadow — and stick with me on this one because it actually fits: one of the Shadow’s trademark, iconic phrases is “What evil lurks in the hearts of men? The Shadow knows!“. There is evil in Dave’s heart, for through the strangely sycophantic Mica People he has committed numerous murders for which no killer has been brought to justice, until, through an inventive twist on said moral justice, sheriff Cranston evens the balance. Nice.

“Gravitas” is a story told by a seasoned, professional writer who knows what he’s doing. Able to interweave the personal, the psychological, the historical, and the supernatural with a confident hand, “Gravitas” makes its moral point effectively. One nice touch is the creation of the Mica People, which calls to mind creatures straight out of Lewis Carroll. Bottom line? An inventive take–with a twist–on an otherwise (relatively) standard storyline. Recommended.