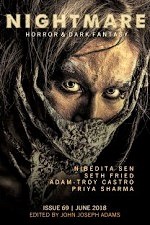 “Leviathan Sings to Me in the Deep” by Nibedita Sen

Issue 69 of Nightmare includes two original short horror stories, the reviews of which are below. The stories the editors have chosen in this issue are incredibly written and ones that I’m certain horror lovers everywhere will enjoy, especially since the two stories are in a nice juxtaposition to one another. “Leviathan Sings to Me in the Deep,” for example, is slow and smooth as it sails ever deeper into the darker waters of the mind. In contrast, “Red Rain” is jarring, fast-paced, and visceral. There is no hesitation or coy lead-in to the tale—from the very first line, the reader is knee-deep in the dreadful circumstances they’ll have to wade through in order to reach the end.

“Leviathan Sings to Me in the Deep” by Nibedita Sen

A whaling ship is haunted by their latest catch. My single-sentence summary, written so as not to reveal too much of the plot, does not entirely do Sen’s tale justice. There is much more to this somber and unsettling tale—strange science, the heavy toll that industrial progress exacts from nature, a captain coming to terms with the horror of his profession, madness, and perhaps even nature taking her revenge.

The horror here is of the creeping psychological variety. It’s not overt or from an external source outside the characters. Instead, it comes from inside their own minds, born of old maritime superstitions. Told through the captain’s diary entries, there’s an intimacy to the telling which makes the crew’s descent into madness even more chilling.

What would you do if suddenly everyone around you began committing suicide, bodies piling to a depth of 40 feet and blood cascading like rivers? “Red Rain” is a truly horrifying tale that has left me at something of a loss for words.

Castro has chosen to tell the tale through a series of questions. The effect of this technique is staggering because it forces the reader to participate directly in the narrative’s events. Had he written this from the point of view of a character, the experience would have been completely different. Although immersed in the tale (Castro is an excellent storyteller), I would have felt safer if I were viewing the events from a distance and watching them happen to someone else. Instead, what Castro has done is make me, the reader, a character within the story. This added greatly to the sense of sickening terror in an already disturbing tale.