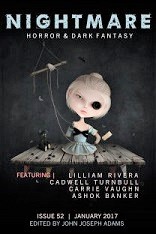 “Loneliness is in Your Blood” by Cadwell Turnbull

There are two first publication short stories in the 52nd issue of Nightmare.

“Loneliness is in Your Blood” by Cadwell Turnbull

This short dark horror describes a female vampire who makes herself invisible while she hunts for human blood. The vampire thinks she is immortal, living among the American slaves. But after hundreds of years, she finds herself growing old. As she ages, she is compelled to suck a young couple dry of their blood, an act that induces her own pregnancy and the birth of a new girl vampire.

As the child grows, the woman teaches her the ways of the vampire. When the child is old enough, she rejects her mother. Realizing that her immortality is actually the passing of her seed to the next generation the old vampire walks out into the sea. The salty waters consume her.

The author told the story through a patchwork of revelations about the woman vampire. This meant there is no real story line, but rather a series of unrelated events. However, the prose was good and the style slowly revealed the plight of the vampire.

This horror short introduces us to Violet, the youngest of three sisters charged with minding the sheep. Her elder sisters warn her each day of the dangers outside the home, and that they will all starve if any sheep are lost. One day, as she prepares to herd the sheep from the pasture, she finds a lamb missing. Violet is torn between her sister’s warnings about the dangers and their cautions about starving if any sheep are lost.

She decides to search for the lost sheep. Drawn to its bleating, she climbs the haunted hill where the demon, Redcap, traps her. Violet is afraid and tries to avoid any traps the demon may set to steal her soul. Redcap plies her with a few riddles, but Violet isn’t good with riddles. Certain that he will take her soul, she discovers that he wants something else entirely.

The story had a nice pace to it and the plot was engaging, pulling the reader forward. But the ending seemed flat and there was little inspiration in Violet as the story’s protagonist.