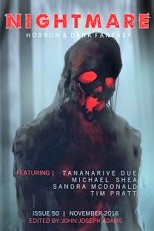 “Migration” by Tananarive Due

“When You Work for the Old Ones” by Sandra McDonald

Tananarive Due tells the story of a young woman who wakes up one morning next to her fiancé and finds herself in the grip of a powerful urge to kill him, which she attempts to do but fails. As we learn more about her troubled past—and the author is skillful at presenting bits of her history, revealed in just the right amount and at just the right time—we are torn and kept guessing as to whether she is possessed by a demon or is a mentally disturbed, intermittently expressed psychopath. Her childhood years were spent in Florida where an exorcism was performed by an old woman versed in such things, but the young woman’s affliction has followed her into adulthood and several failed relationships, her boyfriends describing her as “whack, psychotic and a crazy-ass bitch.”

The story is crafted impeccably, maintaining the level of slowly escalating tension throughout, and the final line is perfect. “Migration” is well done and recommended.

Sandra McDonald’s “When You Work for the Old Ones” riffs on spy movies where the undercvoer operative is given instructions via dead drops, or is bumped into on the street by an innocuous passerby and is slipped an envelope of money in payment for services rendered, and where said assignment instructions are outside the law and often involve murder. The operative does what he or she is told—and any attempt to leave after one’s conscience inevitably comes into play (after the spy uncovers the evilness of those he works for) is not an option. So goes many a spy movie with which we are familiar.

Now imagine the Company is in fact operated by the Old Ones, where the stakes and rules go far beyond anything you might imagine, where even the thought of getting out leads to frightening personal consequences, and you have the gist of this very short tale.

The Old Ones don’t recruit from the usual pool of candidates, but choose instead from those much more likely in need of the compensation they can provide. In this case it is a military veteran who is in constant pain with shrapnel still in his leg, desperately poor, and with a pregnant wife working three part-time jobs. His only choice is to accept the good paying job offered him by his recruiter, and the less he knows about the organization offering him a way out of his troubles, the better. As you might imagine, things take a horrific turn for our operative when it comes to a situation regarding his pregnant wife (another riff on something I shan’t reveal—don’t assume the obvious), but lest I bow to temptation and tease anything further, I will say that the end is very dark and makes its point well. Subtext to anything contemporary may or may not be included, depending on your point of view.