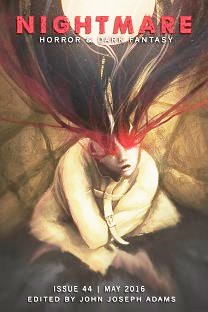 Everybody dies, and at ninety-five the old horror writer doesn’t have long before he too joins the ever growing list of the deceased. Sure, he’s led a good life, one with a strong, if not an illustrious career that unfortunately petered out into obscurity. What could he do when, with each passing decade, humanity was doing a damn better job of creating horror plots than he ever could? But horror is a delicate balance of give and take in “The Old Horror Writer” by Adam-Troy Castro, and just as fiction takes substance from reality, so does reality take substance from fiction.

The language used in “The Old Horror Writer” is incredible, especially in the beginning. Descriptions are vivid, word choice and sentence structure are dynamic and engaging, and the style and point of view work easily together to really grab the reader. With such tight prose teasing the reader in, it’s a bit disappointing that the story isn’t as rich as the writing suggests Castro is capable of. The narrative is half Stephen King and half Lovecraft, but in borrowing from both it loses what makes the two truly existentially chilling. Arguably taken as a parody at the expense of the genre, the literary choices work, but as a pure horror piece it falls short of adding anything new to the catalog.

The Great Depression has hit everyone hard in “Sawing” by Lisa Goldstein. As a chorus girl in the Great Bertoldi’s magic show, Clarissa has seen it all first hand in the places they’ve toured across America. But as much as she hurts for the people suffering around her, Clarissa thankfully only has herself to worry about. No family, no friends, no memories but the scars on her back, Clarissa is as free as a young woman in the ‘30s can hope to be. And when Bertoldi’s assistant suddenly goes missing, Clarissa lands herself a promotion to center stage. But a new girl in the troupe, newspapers detailing a chilling murder, and strange weather patterns all converge on Clarissa in a perfect storm of disasters that will show her just how real the magic actually is.

The setting is what shines in “Sawing.” The Depression Era isn’t often featured in the fantasy genre, and it’s refreshing to see the story told from the tenuous position of a stage performer during that time. The narrative, however, trips over itself a bit in an attempt to keep the reader guessing, and substance is lost when too many plot events jostle for superiority in a relatively short space. The need to tie up loose ends makes the ending feel rushed and leaves the reader wondering whether the importance of the story is in the mundane or in the supernatural.